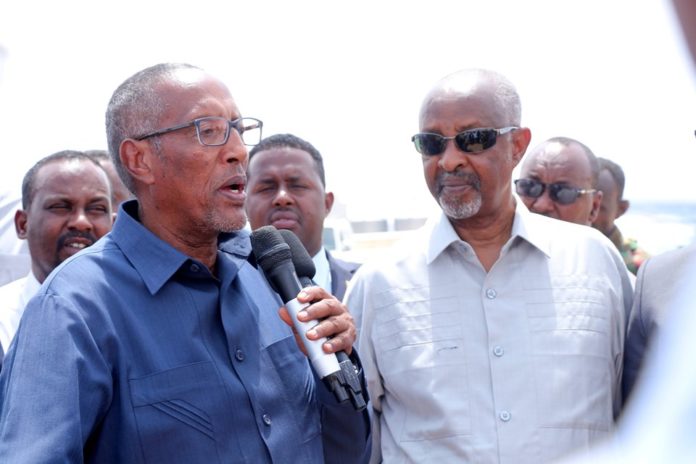 The President has revealed that the Berbera UAE military airbase is no more but be for civil use.

The H.E. Musa Bihi Abdi made the revelations at Berbera port yesterday as he laid foundation stones for new projects and inspected ongoing and completed ones.

He happily announced, “The controversial military airbase that was to be built by the UAE is no more for I have reverted it to civilian use”.

He further said, “The constructors are to jet into the country this week and the airport tower facilities will be put in place”.

The President urged the Berbera Mayor and the Sahil Governor to step up infrastructure building in readiness for a fledgling city that would be pepped up by the over 5km long new and modern runway.

Amongst the important projects the President inaugurated is a water borehole such as that of Kal-gumare and laid foundation stones of others including a new petroleum lab and new tanks at the Berbera storages.

So, too, would new petroleum storage tanks be installed, especially now that the state recently disclosed that it would specifically and specially import petroleum.

The President extensively toured various sections of the port and observed the DP World associated projects that were implemented.

According to the Berbera storage Tanks manager Mr. Hassan Ahmed Embassy, the new storage tanks which the President laid their foundation stones would be one for diesel and another for petrol, each holding 10 thousand cubic meters of the products.

The President who was flanked by Interior Minister Hon. Mohammed Kahin and Water resources Minister Hon. Suleiman Kore urged the residents, especially the elders, to see to it that unity and solidarity amongst the populace be prioritized.

The President who is on his way to Burao had a hectic week in which he traveled all the way to Borama and oversaw the Amoud University graduation.

He likewise oversaw similar graduation in Gebiley at Timad’de University after visiting the Armed Forces agricultural farms in Togwajaale.

According to the Togdheer Regional Governor Hamze the Burao residents are in readiness to welcome the Head of State who is expected in Burao today (Sunday 15th September 2019) to again oversee yet another graduation function of University students. Amoud University was holding its 18th Graduation Ceremony. At the function was the founder of the campus who happens to be the former national President Dahir Rayale Kahin whom the Head of State profoundly praised. At the forces agricultural farms the president rightly pointed out that the poorest were those who lived from hand to mouth or had no food at all.

At Tima’adde, the President noted that it was incumbent upon the graduators to contribute back to the society by imparting their knowledge as per cue.