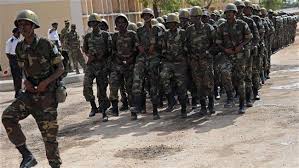 A police officer who did not want to be named told Xinhua on Thursday that the forces were on their way to Baledogle Airport in Lower Shabelle region in Southern Somalia.

“The soldiers died after their convoy was hit by landmine explosion while en route to Baledogle Airport,” the officer said.

Residents said the landmine explosion targeted a military vehicle carrying Somali soldiers, who were escorting a convoy of food and other logistical supplies to Balidogle airport.

Muna Mohamed, a resident, told Xinhua the blast shook the nearby areas, noting they learned soldiers were targeted.

“We heard a heavy explosion and the shockwaves could be felt from a distance. Government forces were targeted in the attack,” Mohamed.

There was no immediate claim of responsibility, but the terror group al-Shabab fighters have conducted similar attacks in the past.

The latest attack came a few hours after another roadside blast injured four senior military officials in Elasha Biyaha village, located on the outskirts of the capital Mogadishu.

The attacks took place despite increased joint military operations by SNA and the allied forces in the areas Mogadishu and its environs.

The allied forces are also carrying out operations in Kismayo port city which was one of the strongholds of al-Shabab that served as its main revenue source before the insurgents were forced out by Kenyan forces in 2012.