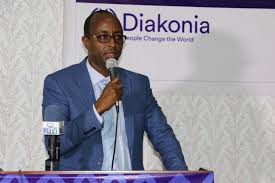 Authorities in Puntland have issued an alarm over drought due to the continued lack of rain.

Radio Ergo’s reporter Abdirahman Mohamed spoke with the minister to find out how serious the situation is and asked him first why he had issued an alarm.

Minister:  In early March this year, we stated the existence of drought and the magnitude of its effects in Puntland State. There are many places affected by drought, so we declared drought in Puntland by informing the Puntland people, traders, diaspora community, and international aid agencies about it. We repeated the same call on 5th April by issuing another statement indicating that the situation was deteriorating.

We thank the aid agencies who conducted a drought assessment.  The government of Puntland is involved in various ways in responding to the drought conditions based on our capacity, including maintaining the boreholes, water trucking and delivery of other services like food and we will coordinate with humanitarian agencies.

Abdirahman: Why has the situation deteriorated so much?

Minister: The cause of this is that tthe Deyr rain failed in parts of Puntland state and even those areas that did experience rain did not get adequate rain.  Prior to that, there was severe drought which killed many livestock and the livestock is what people rely on. Now there is fear that the rains may fail based on the forecast. In many places, water reservoirs have dried up and the boreholes have faced mechanical problems. Therefore if it fails to rain, there could be much hardship. That is why Puntland state put out another alarm.

Abdirahman: Could you mention the worst affected areas?

Minister:  When there is drought, it is difficult to tell which area is worst – if an area had water yesterday, today it does not.  And there is no pasture, therefore we can say that no area is able to sustain itself. However, the worst affected are Bari, Karkar, Mudug, Nugal and Ayn regions.  So the drought is a severe one and there are massive water shortages.

Abdirahman: How many people have been affected by the drought?

Minister: As you know large number of pastoralists live in Puntland State. The drought has affected those pastoralists. It has also affected those who live in urban areas, because there are IPDs who moved from their drought-hit villages to live in towns.  Now as per the record of the Humanitarian Affairs and Disaster Management Agency (HADMA), 1.6 million people are facing drought.

Abdirahman: What is the condition of the people?

Abdirahman: What is your government doing to help these people?

Minister: We did respond.  As a government, we facilitated and implemented efforts to deal with the water shortages. The government plans to use hundreds of water tankers to deliver water to the affected areas and we are also carrying out plans to renovate boreholes. There are also plans to distribute dates, among other services.

Abdirahman: Do you think those hundreds of water tankers will be enough?

Minister: No, they are not enough. The aid agencies are planning to distribute food in some areas. You know, people are satisfied by the mercy of God, but our aim is to reach those areas where people are at risk such as Taleh, remote areas in Buhudle, parts of Qandala, and many other places.

Abdirahman: Did your alarm result in any response?

Minister: Yes it really has. I mean, there are international humanitarian agencies working on assessments, some are responding to the situation already and others are stepping up their work. You know when an agency has not planned for emergency it takes time to respond. We urged them not to be slow to respond as has happened previously. Anyone who wishes to respond should come forward.  We also call on the business community and the diaspora community to play their part.