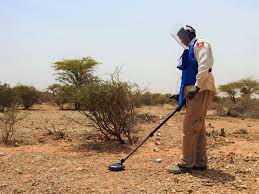 On 8 December 2005, the General Assembly declared that 4 April of each year shall be observed as the International Day for Mine Awareness and Assistance in Mine Action.  To reaffirm our commitment to eradicating the horrendous damage caused by landmines and assisting those who have been harmed by their use, the HALO Trust (Mine Action) invited key stakeholders to the donor sponsored programme to an awareness day and ‘live’ demonstration of mine clearingat a post-conflict legacy minefield in Dararweyne, 35km north east of Hargeisa city.

HALO Trust have been operating in Somaliland since 1999 conducting the full spectrum of mine action (MA) activities; mine clearance, awareness programmes, capacity building, training, mine action equipment and vehicle provision, etc. Their primary focus throughout the programme has beenmine clearance of the extensive fields laid throughout the Somalia -Somaliland borders during the Ogaden War with Ethiopia (1977-78) and then again throughout Somaliland during the Civil War of the 1980s and Clan Conflicts of the 1990s.

Throughout the 30 years of heightened activity, the political importance of the Somaliland capital city of Hargeisa meant it was subject to heavy fighting, civil unrest and eventual evacuation of the entire urban areas (1980s). Therefore, the placement of the Soviet-built military camp at Dararweyne in Hargeisa region of Somaliland was of significant strategic military importance in projecting forces to counter and repel advances towards the city. It was captured from the Somali National Army (SNA) by troops of the Somaliland National Movement (SNM) afterintense fighting during the Civil War. This included the placement of defensive positions and a sizeable minefield directly east of the Military Camp. This site, alongside the numerous on the southern state borders, in and around the city of Hargeisa and several other key mine fields and mined road sites throughout Somaliland, have been the primary focus of HALO Trust’s mine action activities.

Today (Tuesday 9th April2019) mine clearance teams under the command of the Somaliland Ministry of Defense Mine Action Department (SL MOD MAD) and programme managed by HALO Trust, provided a short brief on the status of the Dararweyne mine field, applied safety measures when operating within the minefield and then make a live demonstration on the meticulous and time-consuming process of mine clearing. Mr Abdirashid Ibrahim Aden, Director of SL MOD Mine Action Department then led senior visitors in to the mine field to interact with the clearance teams as they worked (two teams conducting up to 12 hours of mine clearing daily). Inclusive to the HALO Programme Staff and the SL MOD Director, invited visitors included the Head of the Country Programme for the UK’s Department of International Development (DFID), Dr. Phil Evans CBE and the Programme Manager Miss Fiona Rushbrook; from Axiom International Limited was the Senior Programme Manager Mr Chris Weigold and Senior Defence Adviser Colonel (Retired) Ronnie Bradford; and fromUNSOM Integrated Office, Hargeisa was the UN Police Adviser, Superintendent Tommy Stahl (SWE) and UN Military Adviser Lieutenant Colonel Stuart Scott (GBR).

Whilst in the mine field, the visitors were reminded of the joint mandate of HALO Trust consortium and the Somaliland Ministry of Defense (SL MOD); to reach a mine-impact free status through the clearance of all known minefields and provide a robust, sustainable and affordable transition to a SL MOD owned capability that will continue to manage the Residual Explosive Risk of those areas not yet identified.

The SL MOD MAD was formed last year by the amalgamation of the former Somaliland Mine Action Centre (SMAC) and National Demining Agency (NDA). After the visit, Director Abdirashid reinforced the purpose of International Day for Mine Awareness by saying:

“Together with HALO, we have made great progress in clearing so much of the country and our teams continue to work hard. But some landmines and other explosive items may still be discovered. If you find something suspicious, don’t investigate or touch it; mark it at a safe distance and report it to the nearest government office or police station.”