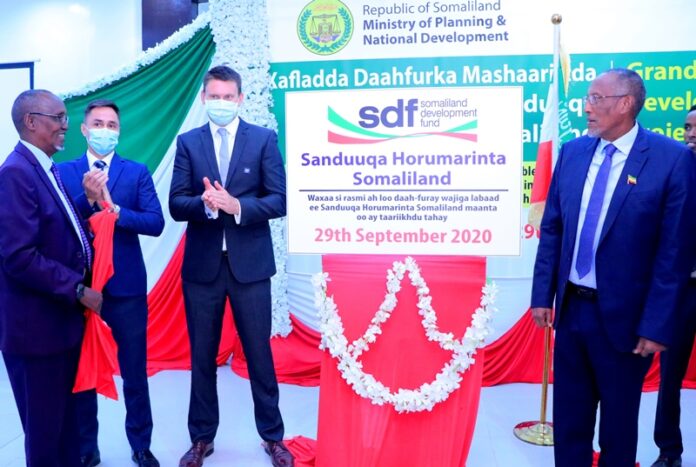 The ground breaking ceremony for the second phase of the SDF projects was organized by the national planning and development ministry.

The colorful event was held for the launching ceremony which saw the attendance of cabinet members, officials from SDF contributing countries inlcuding the likes of Denmark, Holland, the UK, director generals and other guests.

The objective behind the SDF is vital for the implementation of important projects that will be of great significance to the public and shows the government commitment to oversee its full implementation.

The deputy manager of Somailand Development Fund (SDF), Najah Mohamed Adan: “The construction of Maydh jetty port, the restoration and revamping major and vital roads, upgrading water supply services, improving livestock and agriculture production, and enhancing the capacity of civil servants will be part and parcel of the second phase projects of the SDF.”

He also stressed that the completion of the unfinished projects including health and education of the first phase will be the focus.

Morgan Rally, speaking on behalf of Somaliland friends which are part of the countries that contribute to the SDF, has stressed the importance of the development projects for the community.

He underscored that SDF contributing countries are jubilant with the transparency and accountability as well as how the government manages the funds.

The planning minister, Hasan Mohamed Ali Gafadhi, has lauded the accomplishment of the first phase and said that major achievements were made as far as the first phase of the SDF is concerned.

He is hopeful that the projects in phase two will be successful.

President Bihi, in an address during the launching ceremony, has praised the countries that contribute the funds allocated to the SDF in a bid to implement development projects.

He said that the government is committed that the various development projects supported by countries in the world should be transparent and accountable.

He pledged that the projects will be overseen in a transparent manner which will be devoid of any reservations.

He called on the international community to channel the funds allocated to Somaliland via the SDF channel which is tested and is now successful.