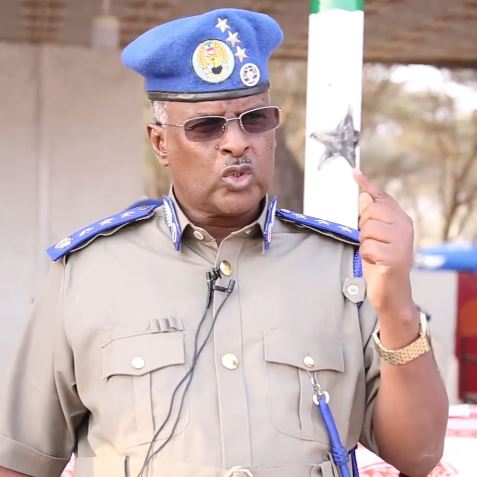 Mandera – Police Chief Brigadier General Mohamed Adan Saqadi noted that the cadets are being prepared to take responsibility by virtue of their tasks.

He quipped that for those professing religious uprightness hence do not conform to the edicts and tenets required thereof such as basic prayers were tantamount to being wayward.

“A cadet is a man who is being trained to lead. He should take lessons from the field, learning armed tactical warfare and associated theoretical lessons given in the classrooms,” said the Operation commander

“The Police commander will inaugurate the officer training, the first of its kind at the Lihle Police academy in Mandera”, added Training Commander.

“The number of soldiers inducted to be trained for cadets is 155 officers, consisting of 97 police, 41 naval personnel and 17 immigration officers”, said Mandera Police   Academy Commander

Chief of Police, Brigadier General Mohamed, strongly urged them to pray saying that, “If we acknowledge our duty of God Almighty, we will know the other things expected of us. If one who is being prepared for responsibility does not practice the religion professed, one wouldn’t be morally righteous”.

Speaking about the importance of the lessons to be learned, Commander Saqadhi said that the officer in charge of the Police station, if he can’t shed investigators’ errors, how he could make justice,” he said, adding, “You have to understand the knowledge to be taught, to guide your work for the community.”

Commander Saqadi said the police force often face complaints from the community. He said that though they worked hard, they have towards correcting their shortcomings even harder.

“If we do not respect the people, we will not get their cooperation”, said Police Commander, and warned the new trainees to be strict in adhering to the rules of the academy, saying, “The Academy has rules, anyone who flouts them, will be held responsible or promptly expelled altogether from the campus.