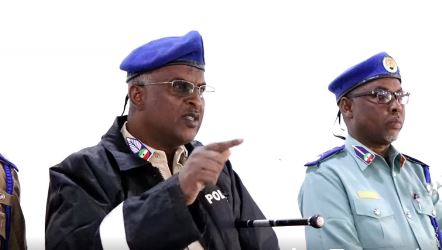 Special attention to be focused on investigative sector, he notes

The Somaliland National Police Commander has ordered divisional and station commanders to streamline their dockets such that apt services maybe rendered to the deserving members of the public.

The Police Chief Brigadier General Mohamed Aden Saqadi (Daba-gale) gave the directives as he opened a workshop for regional commanders over the week for bolstering the police department by stepping up diligence.

He decried the prevalent conditions of police stations, saying that they were not so good hence called for their urgent improvements.

While citing the duties of investigative officers as being the bed-rock of the path to justice, the general similarly pointed out that it was a sector that most complaints emanated from hence dented the image of the force.

We have to make clean police stations’ environment and improve our relationship between the people, treat the victims humanely, respond to their needs promptly, investigate cases swiftly with professional acumen and fairness and treat every detainee well”, said  the commander.

He noted that they had to be bold and point out that the members of the public who need police services are usually heavy hearted in seeking the needed help since the feel the department is not diligent as expected, hence appear at stations begrudgingly.

The police chief said that given the huge public outcry as bedeviling the investigative sector, he warned that the whole image of the administration of the day would be severely dented hence has to be addressed immediately.

He ordered for the complete streamlining of the sector with close supervisory monitoring being done by the station commanders, and by extension, their superior divisional and regional commanders.

He not only called for, but indeed ordered on improving the services provided by police stations to the community, while underpinning the fact that attention need to be paid to complaints on police and how they are handled.