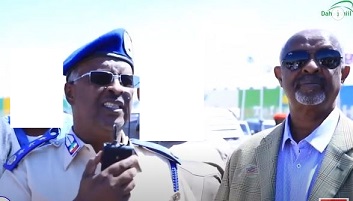 The Minister of Interior Hon Mohamed Kahin Ahmed, who visited the Hargeisa stadium yesterday, stated that the current state-of-art of the games is a source of great joy for Somalilanders, both at home and abroad.

“Many people thought that Somaliland could not afford the regional games, but we did and succeeded to   organize and hold it”, he said.

He said that in the spirit of sports, players were not expected to be so emotional as to lose their minds when they are overwhelmed in a competition while quipping, “one day you may win and in another day you may lose”.

He said that players should compete in peace-full, friendship and civilized manner. He noted out people of all walks of life were hilariously talking about the sporting tournaments going on in the country in most of their conversations.

Minister Kahin thanked the President H.E. Muse Bihi, for his supervisory morale-boosting visit to the stadium, the Ministry of Sports,   the Ministry of Interior and that of Education.

On the other hand the Somaliland Police Chief Brig Gen Mohamed Adan Saqadi praised how police addressed the minor violence that took place on Friday at the Hargeisa football stadium.

He said that games usually create anxieties due to their enthusiastic nature and that the general population liked sports and was quite civilized. He noted that a handful of hooligans could sadly not differentiate between competition and animosity.

He thanked the security apparatus for the swift manner in which they quelled the fracas noting that the people of the city and its suburbs worked well with the police.