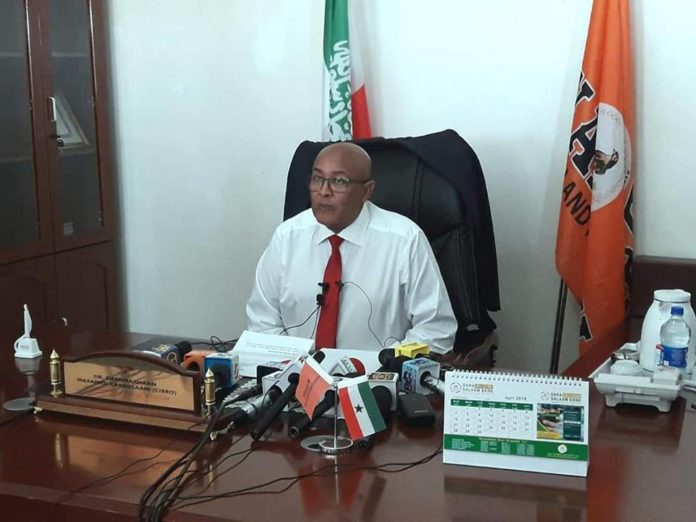 The opposition Wadani party leader in Somaliland has said that the incumbent president Bihi has totally failed to lead a united community and he is administering party of the community.

The opposition leader has scathingly accused of the interior minister to bear the responsibility of the killing of two Somaliland police officers gunned down on duty in Garadag yesterday.

Mr. Irro has alleged the Kulmiye led government is preoccupied with looting public lands and instead of uniting the people, it is rather dividing the state.

Somaliland has lost many allies was this was blamed for the successive leadership of Kulmiye party.

Mr Irro spoke of the high skyrocketing inflation where the shilling has risen in contrast with the dollar but the pric of local commodities remains the same.

He blatantly said that the president who was elected by people chose to lead Kulmiye and Ucid.

He said that the rest won’t be without a leader.

He stated that if Bihi has decided to hold two horse race election, then we won’t be without polls.

He urged Wadani supporters to refrain from taking the voter registration cards which will be administered by Kulmiye and Ucid parties.

The opposition party leader has said that gagging freedom of the press would lead to revolt.

He protested against the torture, arrest and intimidation faced by reporters and media houses.

He took for instance the case of Foore newspaper which has been closed down after court rescinded its operational license which accused of defamation and writing news based on lies and rumors.

Mr. Irro told that before the commencement of Somalia-Somaliland talks that we have set our house in order.

Instead of wasting time, he said it is better to enforce laws, unite the people and hold an inclusive election.

He sent sincere condolences to the families of the two brave police officers killed in line of duty in Garagad district.