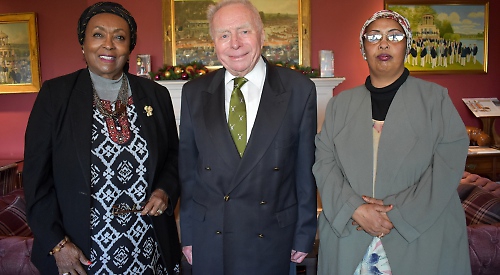 A PHILANTHROPIST and former foreign minister of Somaliland had lunch in Henley as part of a friendship arrangement.

Dr Edna Adan Ismail, a British-trained nurse and midwife who founded a hospital in the republic’s capital Hargeisa, was greeted at Leander Club by members of the Henley Borama Friendship Association.

She was in Britain to collect an honorary doctorate from London South Bank University and was accompanied by Rhoda Ibrahim, the director of the Somali Advice and Forum of Information.

Dr Ismail spoke about the hospital, which opened as a maternity unit in 2000 with only 26 trainee midwives but now delivers thousands of infants every year.

It is also a university teaching hospital with 1,500 students, of whom almost three-quarters are female, learning a range of subjects including medical science, midwifery, dentistry and nutrition.

Dr Ismail hopes to open a teacher training school and is currently seeking candidates who can lecture in teaching skills in English.

She has known the association’s president Brig Malcolm Page for many years as she provides care for veterans of the Somaliland Scouts, the army unit in which he served. It was this connection which prompted him to launch the association in 1983.

Brig Page regularly donates old-fashioned nurses’ watches to the hospital and these are given as prizes to the best performers.

Dr Ismail, 81, said: “It’s a pleasure to see a good friend of many, many years who has been a great supporter of the hospital and of Somaliland both before independence and since.

“His donations of watches are a strong emotional link to my own training in Britain and is a wonderful way to recognise nurses’ efforts. The friendship between Henley and Borama is long-standing and important so I am also pleased to be back in the town for the first time in several years. We cherish the connection and wish to sustain it as long as we can.”

Brig Page said: “I’m delighted and so proud that she has come to see me while staying in England. I don’t like to consider her an ‘old’ friend but certainly a well-established one!”

Somaliland is an autonomous region and self-declared state in Somalia which was formed in 1960 after it ceased to be a British protectorate.