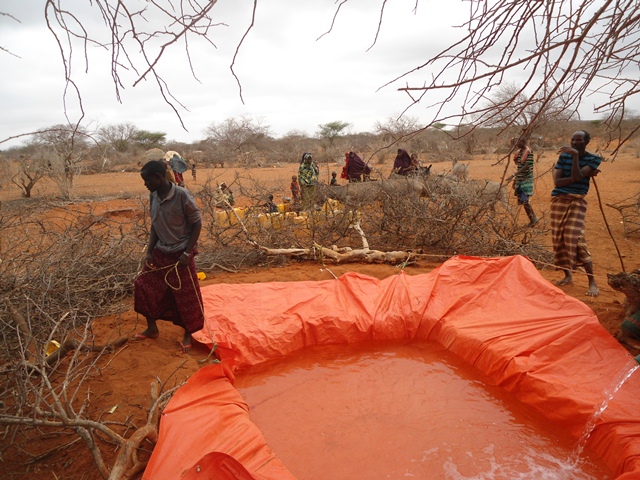 Worries about finding water for his livestock and his family are not bothering Somaliland pastoralist Muhumed Qalinle Adan this year, as the recently built dam just a short walk from his village is now full to the brim with rainwater.

Muhumed’s family normally has to move away from their village of Salahley, 80 km south of Hargeisa, at least once in a year in search of water. In 2019, he was away for six months, trekking for three days and nights across the border into Dabagoriyale, in the Daroor district of Ethiopia’s Somali Region.

The long walks in search of water killed some of his herd, and he is now left with 20 goats and 30 camels.

However, with the new dam that opened last November just a kilometre from Salahley, his animal can drink every day.

“The water supply from this dam will boost crop yields, and the animals will have water to drink. It is a big dam and it is going to hold water for a long time because of the way it was built,” Muhumed told Radio Ergo.

The pastoralist communities living in these villages can now consider giving up their annual migration. They normally travel in a huge radius of up to 200 kilometres to other areas in search of water.

Muhumed said now that water is available, he is planning to set up a small farm at his home, where he can grow some vegetables and spices to augment the family diet.

Mohamed Amin Jibril, spokesman for Somaliland’s water ministry, said the dams are built to modern standards with waterproofed concrete linings to prevent seepage and evaporation. The dams have been built in an area of rangeland with a population of more than 30,000 pastoralists.

He said the government is continuing the expansion of water sources, with the digging four 400-metre deep boreholes, and two big dams each with a capacity of 83,000 cubic metres of water to supply Togdher and Hargeisa regions.

“We started this project to overcome the perennial water challenges we face during the drought seasons,” he said.

The ministry has received support from USAID, Danish Refugee Council, and the UN’s Food And Agriculture Organisation. The locations selected for the water projects are those that experience regular migrations and loss of livestock due to water scarcity.

Amina Jama Ige, a mother of six in Baliabane village, 60 kms from Hargeisa, said that when their water sources dry up she is not able to get enough water to cook for her children and to maintain hygiene.

During the April 2017 drought her family lost 20 animals, forcing them to migrate with the remaining stock to the village of Allaybaday, 75 kilometres away.