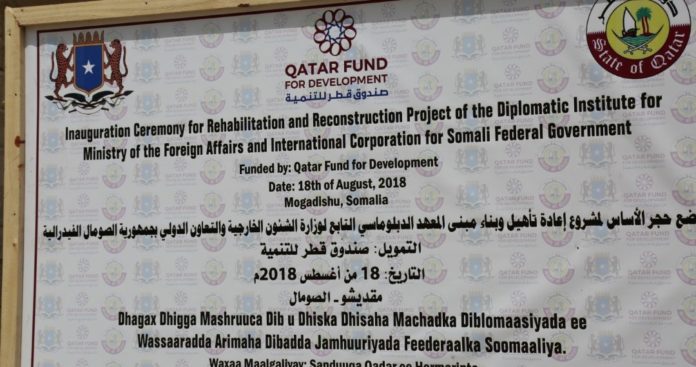 Somalia reopens today the National Institute of Diplomacy, thanks to #Qatar for funding. The Institute founded in 1986 was destroyed during the civil war.

Since 1960, Somalia was active in international forums and has strongly committed and maintained bilateral and multilateral cooperation with many countries around the world.

The National Institute of Diplomacy of Somalia has played a critical role in Somalia’s international relations.

The federal government’s foreign affairs minister Ahmed Isse Awad while speaking at the official opening ceremony of the National Institute of Diplomacy said the reopening of the institution is an indication of Somalia’s ability to come back a strong nation.

Awad who spoke in Mogadishu added that thanked Qatar development bank which financed the re-building of the institution.

The Federal Republic of Somalia is actively involved in international relations with countries around the world, it is apart of many international organizations such as the United Nations, African Union, and the Arab League.

The National Institute of Diplomacy will have presided over bythe federal government’s foreign affairs ministry.