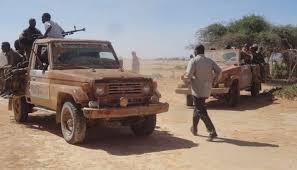 Somaliland interior minister, Mohamed Kahin Ahmed and the accompanying cabinet ministers have confirmed the arrest of a suspect in the killing that led to limited inter-clan skirmishes in Fadhi-Gaab town in western Sanaag province. The minister expressed thanks to the chief of the suspect’s clan, Faisal Abokor Hassan and the commander of the contingent that nabbed the suspect. He said the operation went smoothly without any confrontation or losses. Kahin said: ” Today we announce the arrest of the first case of this conflict. His clan has helped his apprehension. The operation to capture him was conducted by the national army stationed in Fadhi-Gaab for peace-building. The minister  Kahin and accompanying cabinet members have been in Sanaag for the past several months. They were working on ending the recurring clan clashes in the region of which its latest round was reignited by the murdered man in March this year.