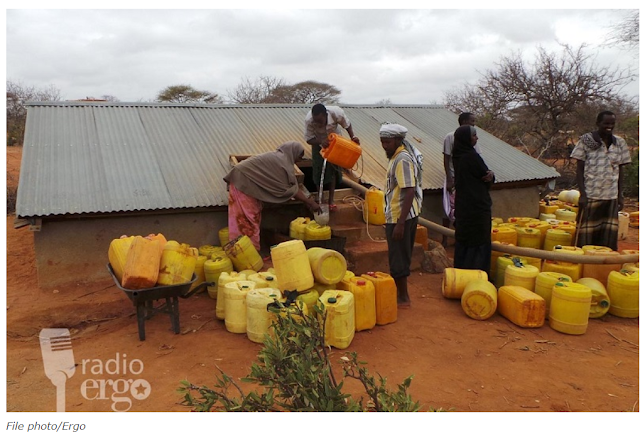 Ulasan and War-imran villages in Saraar have been facing a longstanding water crisis that has forced some residents to move away to other areas. The nearest water source is 30 km away.

Ahmed Mohamed Hashi, the mayor of Aynabo town, told Radio Ergo that members of the local assembly of Aynabo, along with traders and other well-wishers, had contributed money to truck water to around 400 families living in the hard hit villages.

“Water reservoirs and boreholes have dried up as the rains failed leaving many people in distress without adequate water,” the mayor said. “The members hired trucks in response to this emergency situation.”

Three trucks of water a week have been delivered to the areas since January.  The trucks fill up the reservoirs for the villagers to survive on until the next delivery.

Mohamed Farah Sugal, a father of six living in Ulasan, is grateful for the help but not satisfied.

“Every five days, we get 20 litres of water. The little water immediately gets finished and very soon we have no water left to cook. We are all in the same position,” he said.

Mohamed and his family arrived in the village after losing all their livestock to drought in 2018.  He receives $60 support monthly from his brother in Burao town, which they use to buy basics including flour, rice and sugar.

“Since I reached this village, we have not received aid from agencies. But life has taught us to struggle for survival, although I must say that water is much needed here,” he said.

Farrah Mohamed Abdullahi and her family arrived in Ulasan village last December, after fleeing a remote area due to severe drought.

“There is a water scarcity here, we hardly cook any food because of the lack of water. The village has no borehole. We depend on the water tankers coming here weekly,” she said.