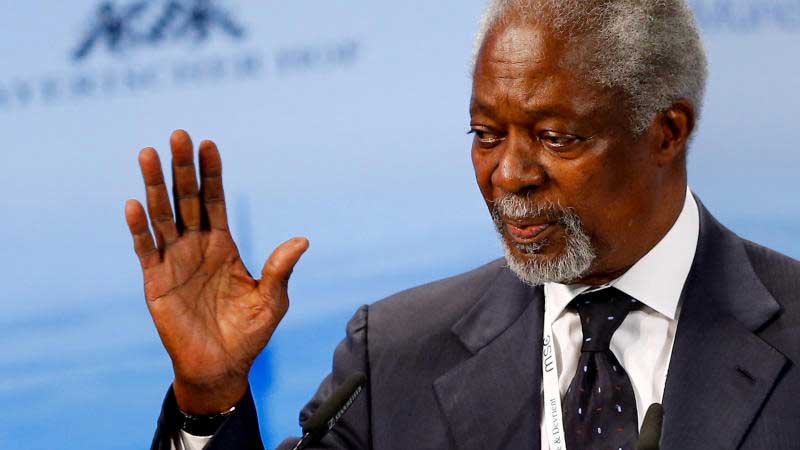 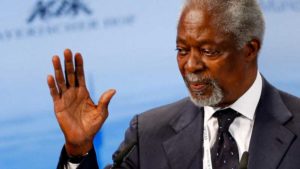 Former United Nations secretary general Kofi Annan will receive a state funeral and burial in Ghana on September 13, the Ghanaian president said on Friday, calling it “a major event for our country”. The announcement was made by President Nana Akufo-Addo following a meeting with Annan’s family in Accra.

Annan, a Ghanaian national and Nobel peace laureate, died on Saturday at the age of 80 after a short illness.

“Kofi Annan was one of the most illustrious people of this generation. He was like an elderly brother,” Akufo-Addo said. “It’s going to be a major event for our country… I expect many leaders to be present,” he said, adding that he would be buried in Accra’s new military cemetery. Born in Kumasi, the capital city of Ghana’s Ashanti region, Annan devoted four decades of his working life to the UN and was the first chief from sub-Saharan Africa. Following his death in Switzerland, where he lived not far from the UN European headquarters in Geneva, Akufo-Addo announced a week of mourning for “one of our greatest compatriots”.

Annan was awarded the Nobel Peace Prize in 2001, as the world was reeling from the September 11 attacks in the United States, jointly with the UN “for their work for a better organised and more peaceful world”. Another Nobel laureate, retired South African archbishop Desmond Tutu, described Annan as “an outstanding human being who represented our continent and the world with enormous graciousness, integrity and distinction”. The first chief to rise from within the organisation’s ranks, Annan left the post as one of the most popular UN leaders ever, and was considered a “diplomatic rock star” in international diplomatic circles.

After ending his second term as chief, he kept up his diplomatic work, taking high-profile mediation roles in Kenya and in Syria, and more recently leading an advisory commission in Myanmar on the crisis in Rakhine state. He enjoyed some success in ending post-election turmoil in Kenya in 2007, and the two main players in that crisis, former president Mwai Kibaki and his opposition rival Raila Odinga celebrated his efforts this week. Annan’s death was met with an outpouring of tributes from world leaders. Russian President Vladimir Putin hailed his “wisdom and courage”, while German Chancellor Angela Merkel celebrated the “exceptional statesman in the service of the global community”. Former US president Barack Obama said Annan “embodied the mission of the United Nations like few others”. Current UN chief Antonio Guterres described his predecessor as “a guiding force for good”. “In many ways, Kofi Annan was the United Nations,” he said. The UN high commissioner for human rights Zeid Ra’ad Al Hussein described him as a “friend to thousands and a leader of millions”.

“Kofi was humanity’s best example, the epitome of human decency and grace. In a world now filled with leaders who are anything but that, our loss, the world’s loss becomes even more painful.”