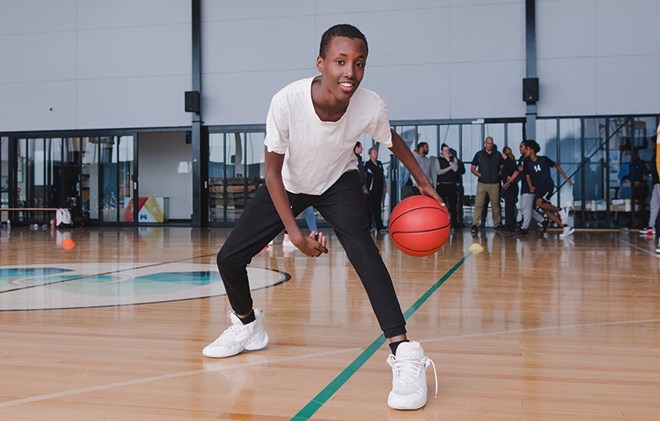 Sport is powerful, and for Hanad Hersi, it’s what kept his life on track.

“I grew up in the flats in North Melbourne. My parents moved to Australia from Somalia before I was born.

“Sport for me was so critical to get to where I am. It’s not just basketball, but any sport. It’s such a great way to bring people together and build community. And community is everything.

“It’s also important, because growing up here it’s easy to get dragged into doing things that aren’t good. It’s easy to go down the wrong path.

“Sport kept a lot of us out of trouble and off the streets. So it’s great to keep the young guys in the community busy and safe,” he explained.

Working for The Huddle, the 25-year-old wants to ensure young people, many of whom remind him of himself, have an opportunity to play sport to help bridge gaps, build community, and stay safe.

One of the initiatives he has driven is the Winter Slam; a basketball tournament which most recently, brought together more than forty young African Australian men from North Melbourne, Flemington, Kensington, Ascot Vale, Tarneit and Werribee.

“A lot of these boys are similar to myself, similar backgrounds, similar love of sport,” he said.

“So, organizing a big tournament like this for the community felt right.”

Among the six teams in the tournament, there was one that caught the attention of onlookers. Team Flemington, by far the youngest and smallest team, beat the odds with an ambition to prove themselves and stand taller.

“We’ve all attended the Huddle,” one team member said.

“We’re protecting our home court. The Huddle is our home turf and its only right for us to be kings of the court.”

This sentiment as well as comradery and teamwork proved powerful with team Flemington claiming the title.

And though a couple of egos may have been bruised in the process, the community as a whole came together, built relationships, and had a memorable time.

The entire tournament proving to be a community effort, with young people from SEDA helping facilitate the event.

Victoria Police also attended the event to show their support of the initiative and help break down barriers between young people and law enforcement.