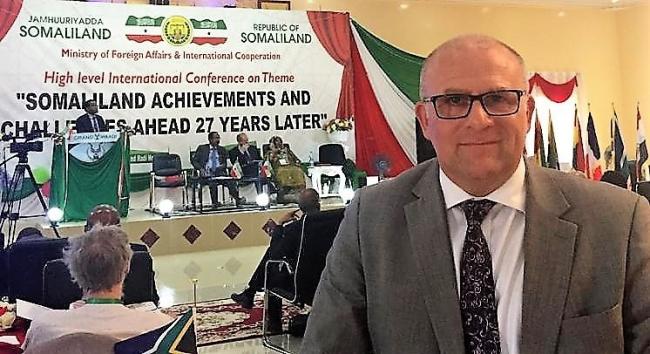 KIDDERMINSTER-based MEP James Carver pledged his continuing support for the re-recognition of the African state of Somaliland when he spoke at a major conference in the capital city last week.

It was his fifth visit to the country, which declared independence from Somalia in 1991, and the conference in Hargeisa celebrated their achievements over the last 27 years and considered the challenges ahead.

Mr Carver, an Independent Euro MP for the West Midlands, said: “Somaliland has shown itself to be a democratic state, which in the tumultuous and unstable Horn of Africa is no mean feat and deserves recognition.

“The conference was attended by representatives from as far afield as China, the USA and Scandinavia, but it is those from other African nations who were present, who perhaps have the greatest influence in lending their support to this fledgling nation, which has an important part to play in achieving stability and security throughout the region.”

Mr Carver also visited the Edna Adan Maternity Hospital as guest of its founder Edna Adan Ismail, a pioneer of maternity services in Somaliland, reducing mortality rates of mothers and babies, and campaigning against the widespread practice of female genital mutilation.

He said: “I have met this amazing lady previously and it was a privilege to spend time with her and tour the hospital which she still runs, having built it from scratch in 2002.”