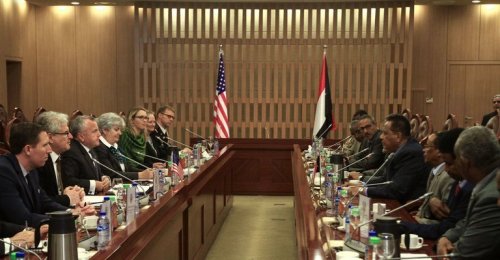 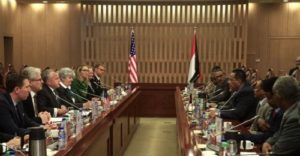 August 4, 2018 (KHARTOUM) – Sudan has handed over the second batch of proposals on the normalization of bilateral relations and its removal from the list of states sponsoring terrorism.

The semi-official Sudanese Media Center (SMC) reported on Saturday that the foreign ministry delivered the proposals to the U.S. embassy in Khartoum which will transmit it to Washington, but it didn’t specify the date of the handover.

On 24 July, the Sudanese State Minister for Foreign Affairs, Osama Faisal, received U.S. Charge d’Affaires Steven Koutsis. According to the foreign ministry, the meeting discussed the ongoing preparations for the second round of dialogue between the two countries.

The decision was in line with the “Five Track Engagement Plan”, in which Khartoum agreed to a cessation of hostilities with the armed groups, opened unfettered humanitarian access in the conflict-affected areas, agreed to support efforts for peace in South Sudan and developed cooperation with the U.S. to counter terrorism in the region.

However, Washington didn’t remove Sudan’s name from the list of state sponsors of terrorism. In addition, it keeps in place targeted sanctions against individuals with arrest warrants related to atrocities committed during the conflict in Darfur.

In November 2017, U.S. Deputy Secretary of State, John Sullivan, was in Khartoum to launch the second phase of the normalization process and pointed to the need for reforms on human rights and religious freedom.

Furthermore, the two countries agreed to exchange ideas and written notes before to resume the second phase of talks on Sudan removal from the terror list.

Citing sources in the foreign ministry, SMC said the Sudanese government is now waiting for Washington response on its latest propositions but didn’t disclose its nature.

There are “ongoing understandings and meetings between the two sides in order to reach a specific formula for the agenda and the axes of bilateral dialogue,” the source further said