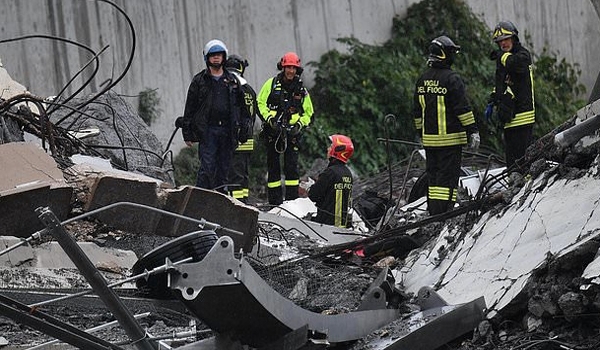 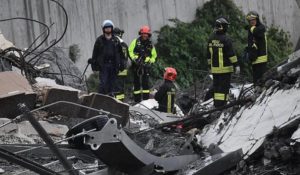 TEHRAN – Italian emergency workers pulled more bodies out of tons of broken concrete and twisted steel on after a highway bridge collapsed in Genoa, raising the death toll to at least 41 people.

The number of people killed in the collapse of a bridge in Genoa has risen, reaching 41 people, the Italian news agency ANSA reported on Saturday.

Approximately 30 cars and up to 10 trucks were on the road were on the bridge when the disaster occurred, according to a senior official in the civil protection agency.

About a dozen remained hospitalised in serious condition, according to authorities.

Houses in the immediate vicinity have been evacuated out of fear that the two remaining sections of the bridge would also give way. More than 400 people were evacuated from buildings near or below the still-standing section of the bridge.

Head of Genoa’s public prosecutor’s office Francesco Cozzi stated that he was ready to “open a file for negligent multiple homicide and disaster”, and it would be against unknown persons “because the reasons for the tragedy are still unknown”.

Bridge operator Autostrade per l’Italia said it had carried out regular, sophisticated checks on the structure before the disaster and these had provided reassuring results.

Italy’s Transport Minister Danilo Toninelli ordered safety checks of all major infrastructure across the country, calling for senior managers to resign at the company operating the bridge.

Toninelli had described the incident as an “immense tragedy”.

The reasons for the collapse have not yet been established.

“Now is the time for a common commitment in order to face the emergency, assist the wounded, support those who are mourning,” President Sergio Mattarella said in a statement, adding that “then a serious investigation into the causes of what happened [is needed]. No authority can evade full responsibility”.

The 100-meter long section of the A10 motorway in the port city collapsed Tuesday morning. The bridge, also known as the Ponte Morandi, was built in 1968 but it underwent redevelopment work in 2016.

The director of motorway operator Autostrade (ASPI) has said that the collapse of the bridge was impossible to predict. The transport body, which is owned by the infrastructure group Atlantia and controlled by the holding company of the Benetton family, manages the stretch of highway that collapsed.

“The collapse was unexpected and unpredictable. The bridge was constantly monitored, even more than was foreseen by the law,” Stefano Marigliani, ASPI director for the Genoa area, told Reuters, adding that “there was no reason to consider the bridge dangerous”.

The design of the bridge has come in for criticism in the past. Antonio Brencich, a professor specialising in reinforced concrete construction at the University of Genoa, called the Morandi bridge “a failure of engineering” in an interview with an Italian broadcaster in 2016.

“That bridge is wrong. Sooner or later it will have to be replaced. I do not know when. But there will be a time when the cost of maintenance will be higher than a replacement,” the academic told Primocanale.