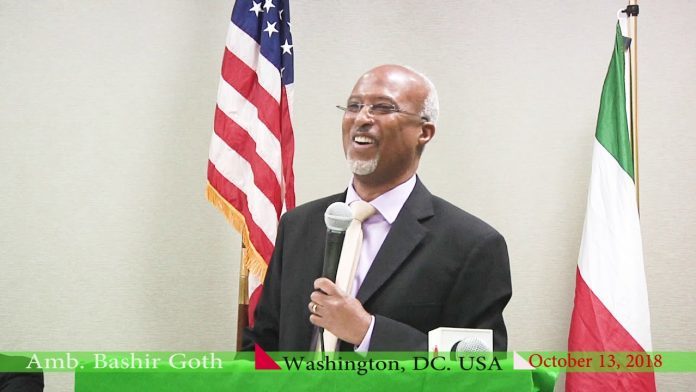 Horndiplomat: Could you please introduce yourself and Your Office?

Representative Bashir Goth: I moved from the media and communication industry to my current role. I worked over 30 years as a journalist, news editor, columnist and communication advisor for global energy corporations, international organizations and governments.

Somali people also know me as a poet and a cultural custodian who writes extensively about cultural issues, particularly Somali music and literature.

Horndiplomat: In Your first speech as the Somaliland Ambassador in USA, you deplored lack of cohesion among Somaliland community members, and you contrasted it with pre-1991 days of activism. What is your plan to change the situation for better?

Representative Bashir Goth: First, I would like to be clear that my title is Representative and not an Ambassador. Ambassadorship is something that Somaliland must earn. It is one of the perks that will come with recognition.

People always like to see quick results. And when that doesn’t come as quickly as expected, the momentum sometimes slows down. My plan is to engage with Somaliland communities all over the country and to reignite their enthusiasm for the common cause. We have a lot to be proud of. Somaliland has built a peaceful, stable, and functioning democratic state in an otherwise volatile security environment. It held several one-person-one-vote elections and peaceful transitions of power. And it successfully deterred terrorism from its territory and piracy from its waterways, mainly with domestic resources and little international assistance.

Somaliland serves as a model for others within the region and beyond. It is these achievements that I want Somalilanders to keep in mind and to remind themselves that we can achieve more. Somaliland communities need to be more active, better organized, and more engaged. They need to be more visible in having a positive impact both in their neighbourhoods where they live and in spreading the story of Somaliland.

Horndiplomat: In the same speech you said you “are not a member of any Somaliland political power”. Ambassadorial appointment is a type of political appointment. An Ambassador will be obliged to support the government’s policies no matter how unpopular those policies are.  How do you respond to people who think a non-political Ambassador is oxymoron?

Representative Bashir Goth: As I said I don’t belong to any party. I don’t have to belong to a party to serve the nation. Somaliland President is today a president for all the country. He is not a president for his party supporters only. Also, Somaliland’s foreign policy has been consistent throughout the years, regardless of the government and party in power. Its focus is to find international support and recognition for Somaliland. I believe one doesn’t have to belong to a party to advocate for that cause. It is the cause of the whole nation.

Horndiplomat: How can Somaliland take part in or keep pace with geopolitical changes in the Horn of Africa?

Representative Bashir Goth: Somaliland was ahead of the current geopolitical changes. It was a peaceful, stable place, had a multiparty system and was the only country in the region that held several nationwide elections that were declared free and fair by international observers. It always had free press and freedom of speech despite a few hiccups and It deterred terrorism from its territory and piracy from its waterways. In my opinion, it is the current geopolitical changes that caught up with Somaliland and not the other way round. But the challenge for Somaliland is that you remain invisible if you are not internationally recognized and unless you pose a threat to global security.

Horndiplomat:  What is your view of current political developments in Ethiopia? Will those developments impact the relationship between Somaliland and Ethiopia?

Representative Bashir Goth: The developments in Ethiopia are a domestic issue. Somaliland has strong relations with Ethiopia based on economic interests and security cooperation. The two sides worked together over the years in safeguarding the peace and stability of the region. And as Somaliland government said several times, relations between Somaliland and Ethiopia remain strong.

Horndiplomat: In a triumvirate statement on Bahr Dar Meeting, the leaders of Ethiopia, Somalia and Eritrea said they stressed the importance of respecting the sovereignty, territorial integrity and political independence of Somalia as well as their firm support for the Somali people and the Federal Government of Somalia and all its institutions, how does this stance affect Somaliland’s role in the region? Horndiplomat: One-third of Somaliland territories is described as disputed territories. Neither the government nor political parties are discussing this issue. What are ramifications of their silence on a major national issue?

Representative Bashir Goth: Somaliland doesn’t consider any part of its country as a disputed territory.

Horndiplomat: Many people criticise Kulmiye government for falling short of boosting opportunities for diplomatic recognition for Somaliland. Do you agree to this assessment?

Representative Bashir Goth: When you say Kulmiye government, do you mean Kulmiye government led by former President Ahmed Silanyo or current government led by President Muse Bihi? If you mean the current government, it is obvious that it is dealing with a different political landscape and regional developments that are still unfolding. But Somaliland’s foreign policy is quite clear and has been quite consistent over the years. Somaliland is striving to gain regional and international recognition as a sovereign state. It needs the world to respect the will of its people. This is an existential issue of nationhood for the Somaliland people. And history tells us that the journey to achieve such a remarkable goal can be very long.

Horndiplomat: Somalia-Somaliland talks are slated to resume. What argument will carry much weight in favour of Somaliland cause if Somaliland is in territorial dispute with Puntland, and in sovereignty dispute with Somalia?

Representative Bashir Goth: Somaliland’s argument is very clear and has been on the table for a long time. It is a historical fact that Somaliland and Somalia were two independent countries that decided to unite in 1960 as part of a bigger dream to bring all Somali people in the Horn of Africa together under the umbrella of greater Somalia. That didn’t work and in fact, the unity of the British Somaliland Protectorate and La Somalia Italiana ended in tragedy. Somaliland people then reclaimed their sovereignty in 1991. So, to talk about anything else but the sovereignty of Somaliland will just be a waste of time. It will also prolong the current political impasse and will be detrimental to the much-touted Horn of African integration. Therefore, unless Somaliland is recognized, and its sovereignty respected, Somaliland’s issue will remain as the sticking point to the implementation of any regional agreement. Simply because the Federal Government of Somalia knows that they cannot sign any agreement on behalf of Somaliland. Horndiplomat: How do you see Somaliland’s economic role in the Horn of Africa from the perspective of maritime trade?

Representative Bashir Goth: Berbera Port has always been the region’s economic nerve; and with its take, over by DP World Berbera Port is poised to become the maritime hub of the Horn of Africa. Apart from being a gateway to both Somaliland and Ethiopia for the export of livestock and import of goods, the Free Zone to be built by DP World will also house a lot of industries while Somaliland’s fisheries industry will greatly benefit from it.

The facility, being built near the regional port of Berbera, is expected to be completed by June.

Representative Bashir Goth: I would like to remind Somalilanders that after 27 years of independence through which Somaliland went through different challenges and circumstances, Somaliland has proven to be a reliable partner for democracy and stability in the region. Its contribution to the global peace and security cannot be underestimated. And with its strategic position near Bab Al-Mandab strait, its youth population and its untapped resources, Somaliland’s vital importance for international shipping, security, and regional development will only grow.