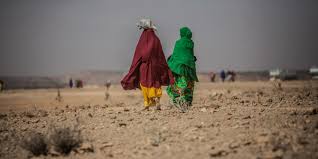 JULY 25 – More than 15 million people are in need of aid as drought hits parts of
Ethiopia, Kenya and Somalia again. Yet lessons from the devastating droughts of
2011 and 2017 are being ignored, putting lives at risk, warned Oxfam today. The international agency is calling on governments to support the aid effort which is
currently just over a third funded, making it difficult to help all those who need it and
prevent an even greater humanitarian crisis. Consecutive poor rains have destroyed crops and the means to earn a living, and
eroded people’s ability to cope leaving 7.6 million people across the three countries
in severe hunger. The crisis is compounded as millions of people have been forced
to flee their homes in the region due to conflict and the effects of drought.
Lessons learned from the 2011 famine, which killed over 260,000 people, helped
avert a famine in 2017 with large scale, swift funding ensuring an effective
humanitarian response.
Millions of people are still recovering from the 2017 drought, which left them even
more vulnerable to the impact of the current drought. However, at the same stage
two years ago the humanitarian response was three-quarters funded.
Lydia Zigomo, Oxfam’s Regional Director for the Horn of Africa, said:”We
learned from the collective failures of the 2011 famine that we must respond swiftly
and decisively to save lives. But the international commitment to ensure that it
never happens again is turning to complacency. Once again it is the poorest and
most vulnerable who are bearing the brunt.
“We cannot wait until images of malnourished people and dead animals fill our
television screens.. We need to act now to avert disaster.”
The serious international shortfalls contrast with a more proactive response from the
governments of the three countries: the Kenyan government is leading its drought
response with minimal international funding; Ethiopia is paying nearly half the bill of
all humanitarian activities in the country; Somalia has also significantly improved
security and humanitarian access. But each country must expand these efforts and
without more international support they will not be able to avert a greater crisis.
Halima Adan, Deputy Director with Oxfam partner organisation, Save Somali
Women and Children, said: “We are face-to-face with this crisis every day and
scraping together all possible resources to ensure the best possible response. This
means maximising direct funding to local humanitarians, embedded in communities
and who are nearly always the first responders in any crisis. Without enough funds
and the right kind of support, our hands are tied.”
Jama, a Somali displaced since the drought two years ago, fears an even
worse outcome this time around: “We lost all of our livestock in 2017. If there are
no solutions and the situation doesn’t improve, we will lose everyone here. I’m afraid
of losing people.”
A climate crisis spiralling out of control has made drought the new norm in the region
and is a reflection of global inequalities where vulnerable communities, who have
done least to create the climate crisis, face its most devastating impacts. The
immediate humanitarian response must be matched with genuine commitment to
addressing systemic causes of the crisis.
Oxfam and its partners are currently helping hundreds of thousands of people with
life-saving support in Ethiopia, Kenya and Somalia by providing clean water and
rapid flexible cash assistance, matched with longer-term support to build stronger,
more resilient communities.
For press queries, contact:
(Nairobi) Faith Kasina, Regional Media Adviser | faith.kasina@oxfam.org| +254 (0)
736 666 663
(Hargeisa) Dustin Barter, Regional Drought Policy Lead
| dustin.barter@oxfam.org| +252 636707643
Notes to Editors
1. Full report is available here: https://oxf.am/2Ya7qTk
2. Photos of people affected by the drought in Somaliland as well as Oxfam’s work
there: https://wordsandpictures.oxfam.org.uk/?c=37883&k=8b48af58a9
3. B-Roll footage showing the realities of the drought in the Horn, where pasture is
often non-existent, communities struggle to meet basic water needs and forced
movement is prevalent. Filmed in Somaliland, in the eastern regions of Sool and
Sanaag: https://oxfam.app.box.com/s/o8enf7i2ht0jmhb4ttwjdlq275v7hy60
4. 15.3 million people require humanitarian assistance and 5.6 million people are
displaced. Funding of Ethiopia and Somalia’s Humanitarian Response Plans (HRPs)
are collectively only 35.4% funded. The funding gap to December 2019 is US$1.5
billion.
5. Numbers of people in need in the three countries for 2019 Horn of Africa drought:
Overall number of people in need of humanitarian assistance
in Horn of Africa 15.3 million
Somalia 5.4 million
Ethiopia 8.3 million
Kenya 1.6 million
Total number of people experiencing acute or severe hunger
due to the drought (IPC3&4) 7.6 million
Ethiopia – drought-impacted southeast 3.8 million
Somalia 2.2 million
Kenya 1.6 million
6. Oxfam i s providing clean safe water through by truck and sol ar-powered
boreholes, latrines for good sanitation and hygiene as well as cash assistance for
affected families to buy food and other necessities. In Somalia, we use desalination
units in communities to reduce salt levels in water and make it fit for human and
animal consumption. For the pastoralists, we provide emergency fodder as well as
animal vaccinations.