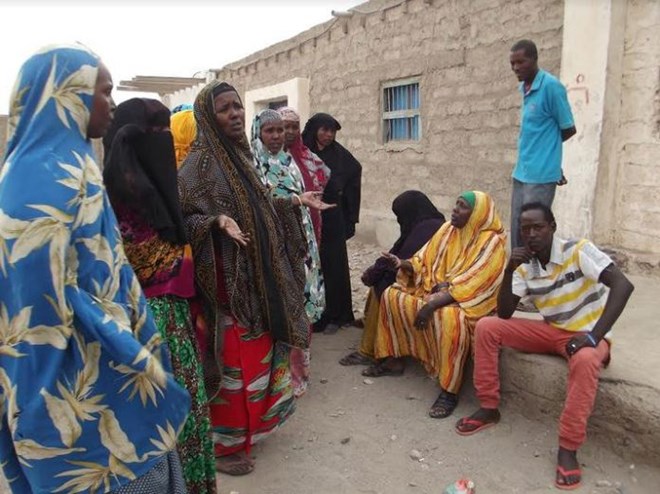 For the last six years, Elmi Noor, 38, has been making $4,000 a month from what he terms a ‘lucrative business’ – smuggling young people from across East Africa to Libya, where they are invariably held for ransom by criminal gangs under cruel conditions.

Noor coordinates a network of people smugglers based in several African countries, who organise perilous journey for young Somalis eager to cross to Europe for better lives.

After a four-month investigation, Radio Ergo journalists tracked down Noor and convinced him to meet one evening at a market place in Hargeisa, the administrative capital of Somaliland, for an interview.

Speaking to Radio Ergo, Noor confirmed that he had smuggled 4,000 people from Somaliland to Libya since 2012. He stated that the majority of these people had probably died either in the hands of Libyan militiamen who captured them or on risky sea crossings to Europe.

Noor appeared not to care about the responsibility he and his co-smugglers bear for the suffering and even deaths of so many young Somali men and women.

Noor said his work was risky and they operated secretly, taking care to switch Messenger accounts frequently to cover their trail, to avoid capture by the Somaliland police.

“We have that worry about falling into hands of the police but we carry out our work covertly. So it is very rare for the police to notice our operations,” Noor said.

Noor works with 10 others to lure young people into hiring them to get to Europe. Some would-be migrants are convinced by ‘leave-now-pay-later’ scheme offered to them, while others are told to pay as little as $300 thinking that will get them as far as Europe.

But another reality dawns on them when they find themselves in the hands of an affiliated criminal syndicate in Libya demanding huge ransoms by force.

According to Noor, the militiamen in Libya fix the amount that the captives pay. He and other members of the trafficker ring get their commission sent to them through small money transfer firms.

Radio Ergo made contact with a second trafficker in Hargeisa, known as Hassan Ali, who agreed to speak on the phone but not in person.  The journalists agreed to distort his voice on recordings to be broadcast, in order to conceal his identity.

Ali said he earns between $500 and 800 per individual based on the number of migrants he lures. Before he joined the network, he travelled to Libya aiming to reach Europe but fell into the hands of the human traffickers himself and was held captive for several months. During that time, he learnt Arabic and worked for the traffickers as a translator. He was set free and returned to Somaliland, where he joined the Libyan trafficking ring as an agent.

During his years in the sordid business, Ali said he had information of the deaths of nine of the people he had helped to traffic. Some died on their way to Libya, while the rest died in detention centres run by Libyan militia.

“I chose to work so whatever it costs does not bother me,” Ali boasted to Radio Ergo. “I started this work when I saw the opportunities that you get in trafficking.”

The Libyan traffickers set ransom demands of $8,000-$12,000. Failure to pay brings threats of removing organs, maiming, or other kinds of physical torture to try to coerce relatives into sending money.

In 2016, days after her son left Hargeisa for Libya without her knowledge, Asha Muse received a call from a human trafficker in Libya giving her 24 hours to pay a $6,000 ransom to save her son.

She tried to negotiate over the amount but they threatened to execute her son if she could not meet the demand.

“I sent $1,500 to a Somali trafficker but days later he called me again and vowed to kill my son if I failed to pay the balance. I was so frustrated as I was unable to get the amount. I begged my relatives to raise the amount and finally, I got the money,” said Asha, a mother of seven, who earns a living as an ice cream vendor.

Ahmed Abdirisack Muhumed, who now lives in Germany, told Radio Ergo that he was subjected to abuse and torture to force him to pay ransom in 2016, whilst held by smugglers.

“We were tortured, our hands and legs tied behind our backs. They locked us inside a container where we hardly ate anything,” said Ahmed, whose hand was broken in the ordeal.

“My family sent $10,000 ransom but no sooner had I been released than I fell into the hands of another group who demanded $2,500. I had no other alternative but to pay,” he said.

Radio Ergo spoke to a third smuggler during the investigation, who denied that any torture or beatings happened. He claimed the process was safe and secure but hinted that the safety of the migrants depends on the type of smuggling networks.

“We take care of them, we do not torture them. Our work is to take them to the Ethiopian capital, Addis Ababa. To evade capture by the police, we do not take highways but instead use trucks to reach the destination safely. From Addis Ababa, the migrants are handed over to another group who will take them to Libya through Sudan,” he said.

According to Somalia’s Ambassador to Benelux and the European Union, Dr Ali Said Faqi, about 35,000 Somali youth are currently stranded in Libya. Five hundred of them are being held for ransom in cells operated by Libyan militias.

“The migrant youth are subjected to beatings with little food to eat, there are no sanitary conditions in the detention centres,” the ambassador told Radio Ergo.

In 2015, Somaliland approved a law criminalising human trafficking, which carries prison terms of between one and 12 years

Somaliland Police Chief, Abdullahi Fadal, told Radio Ergo that the state had sentenced nine individuals found guilty of human trafficking to four years imprisonment last July. They were trying to traffic 30 people from Berbera town, where they were intercepted by the police.