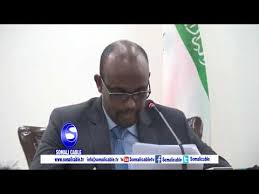 The gov’t has, with effect from today revoked the licences of two telecommunication companies operating in Somaliland for tax evasion.

Nationlink and Africa Online have failed to pay the taxes for operating in the country according to the announcement that the minister responsible for posts and telecommunication has made on Monday.

The minister, Mr. Abdiweli has further revealed that the ministry has apprised of the firms to pay the taxes before their licences cancelled.

The minister has further stated that they have written letters addressed to the heads of the firms to comply with the order.

Mr. Abdiweli has added that the law pertaining to the telecommunication stipulates that if firm fails to respect the terms of the agreement then the ministry reserves the right to cancel the license for operation.

Speaking to the media, Minister, Abdiweli, said such companies should also take immediate steps to  pay off their taxes before they are cancelled their licenses on the grounds of tax evasion.

He made the comment when he held a media briefing at his office this morning.