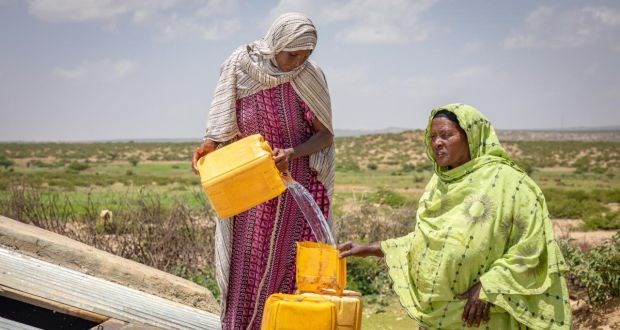 If a single drought is classified as an environmental bullet, what is facing Somaliland in the Horn of Africa is rapid machine-gun fire. The increasingly aggressive antagonist is global heating.

Spending time with its stoical people in remote villages in the northern part of this region of Somalia, they recount how their pastoralist existence – as nomads rearing livestock – is under immediate threat.

If they can’t continue to eke out a living – farming a mix of goats, sheep and camels or growing crops, mostly maize, sorghum and cow bean – then the only choice is moving to the cities where there are already overcrowded camps for internally displaced people. The inhabitants of these camps are climate refugees driven from their land not by conflict, but by lack of certainty on growing seasons, extreme weather events and absence of water.

When asked about climate change, villagers have heard of the term but indicate they do not know too much about the science. They prefer to cite evidence: decline in livestock, destruction of crops. Then they invariably highlight hope that the rains will come after all – and declare, in any event, God will look after them.

On a recent visit to assess conditions on the ground and preparedness that has become critical to countering the worst effects of drought, Concern Worldwide’s media relations manager Eamon Timmins underlines the importance of assessing firsthand the impact climate change is having on some of the world’s most vulnerable communities. “The people of Somaliland are facing into their second severe drought in three years,” he says.

Concern is working to help people become more resilient to these challenges through measures such as underground water tanks, climate-smart farming techniques and the introduction of quick-maturing and more drought-resistant crops. Many projects are run on a multi-agency basis; some benefit from funding from Irish Aid, the overseas aid wing of the Department of Foreign Affairs. “We are also assisting through electronic cash transfers to the most vulnerable households,” says Timmins.

“Climate change is not an issue to be dealt with in the future, an issue for our children or grandchildren. It’s here and it’s killing people now. The communities in Somaliland are among the 45 million people in countries across the Horn of Africa, east Africa and southern Africa who will not be able to grow sufficient food for themselves this year as a result of drought,” he adds.

At first viewing it does not appear to be a place on the brink of famine. The pastoralists have a simple lifestyle where work gets done, while cash support eases hardship for vulnerable families. The extent of poverty is shocking, however, and most evident is the absence of basic sanitation or piped clean water supplies, not to mention tarred roads – a scenario replicated in urban areas.

As we observe the rural landscape, Concern area co-ordinator Lena Voigt says: “Somaliland is as green as it gets.” But, on closer inspection, many crops are barely a few inches above ground. Nomadic communities attempting to become more permanent “agro-pastoralists” will be lucky if they are usable as feed, let alone nourishing their families.

It soon emerges the normal pattern of drought every five to seven years – with time to recover, to restock and to avail of better harvests – is disappearing. In a briefing, a government official outlines how Somaliland’s national disaster preparedness and food reserve authority’s strategic plan is being implemented, including the building of seven large warehouses to store food and plastic water tanks.

Herd owners in the village of Carracad, in the Sonag region, grimly indicate livestock losses. The village relief committee warmly welcome a visiting delegation under a large tree. One committee member, Osman Alale, confirms Cyclone Sagar in 2018 washed away 80 per cent of farmland, while remaining livestock – a source of income in the past – was not good enough to sell or generate milk. A good camel can be worth up to $1,000 (€900).

While they don’t receive any advance rain forecasting, “sometimes it rains somewhere else; we move there,” says Alale. “We understand climate change,” he adds, but the absence of rains means cultivation is delayed and the harvest is pushed back.

They make up a community of 350 households living in small huts, some built with mud, others with sticks and cloth covering. There is no school and the nearest mobile health clinic is 20km away over rough terrain. A borehole situated below a dried-out river containing cloudy, dirty water is shared by humans and animals.

Two adults help teach children under that tree. There are no books; no music, no art. Basic living, it seems, leaves no opportunity for such indulgences, though, when the rains arrive, they gather to celebrate, Alale says.

Howa Yusuf points to a mountain one hour’s walk away where she lives with her family including 12 children. She had 80 sheep and goats reduced to 10 post-cyclone. Cash support of $60 a month is used for food and to restock. She plans to plant maize and make charcoal, but her big worry is climate change. Last year at this time it was shaping up for a normal harvest; this year a fraction of that is emerging.

The village has a chaotic feel as herds of goats and sheep wander through intermittently, sometimes with young children doing the herding. But drone footage suggests an overall order in the positioning of mud houses; animal pens made from spiky brambles to keep hyenas out; a communal gathering point; and areas for the planting of crops. Looking at the images from above, it is sobering to think we could be witnessing the demise of this ancient civilization.

The Famine Early Warning Systems Network said in June 2.2 million people in Somalia could face starvation by the end of the summer, unless there are urgent efforts to respond. A further 3.2 million people – a fifth of its population – will be uncertain of their next meal, and that could soon be 5.4 million. That includes 1 million children, of whom 180,000 are “acutely malnourished”.

The ability of aid agencies to respond is hampered by a poorly funded humanitarian programme for Somalia. Communities are still struggling due to the two-year drought that ended in 2017. At least prompt action then ensured deaths were a fraction of the 260,000 people who died in the 2011-2013 famine. Some say this indicates “donor fatigue”, others question if the humanitarian sector is “too risk-averse” in Somalia.

Cyclone Sagar in May 2018, combined with spring flooding, affected over 1 million people and

temporarily displaced 274,000 people. Then the 2018 “Deyr” rainy season (October to December) was poor. This year, the “Gu rains” that normally start in March and end in June came late and ended early.

“We were caught by surprise at just how quickly this drought has returned,” says Nasra Ismail, director of the Somalia NGO Consortium. “The time for people to recover has been halved and has been continuing to decrease every single season. Ultimately, it’s a climate crisis.”

Moreover, climate disruption is showing its insidious side. A failed rainy season was partly caused by increased cyclones in the southern Indian Ocean, which stopped rains from moving north.

Aid agencies say intervening early would avert the worst human suffering and prove more cost-effective. But a humanitarian response plan, which sought €1 billion for 2019, had received only a fifth of this by end of May. It has since been replaced by a drought-response plan seeking €750 million.

Our visit to Somalia coincides with a warning from UN special rapporteur on extreme poverty and human rights Philip Alston about the injustice facing climate-exposed countries. “While people in poverty are responsible for just a fraction of global emissions, they will bear the brunt of climate change, and have the least capacity to protect themselves,” he says.

“We risk a ‘climate apartheid’ scenario where the wealthy pay to escape overheating, hunger and conflict while the rest of the world is left to suffer.”

In his report, Alston says the human rights community, with some notable exceptions, “has been every bit as complacent as most governments in the face of the ultimate challenge to mankind represented by climate change”.

Somaliland and much of the Horn of Africa may best illustrate this emerging “climate apartheid”. Many here will have to choose between starvation and migration.

Globally, climate crisis disasters are happening at a rate of one a week, though most draw little international attention. Large numbers of “lower-impact events” causing death, displacement and suffering are occurring much faster than predicted, observed Mami Mizutori, UN special representative on disaster risk reduction recently.

It is not a long-term problem; “it needs investment” now. “People need to talk more about adaptation and resilience,” she told the Guardian.

Many of the lower impact disasters would be preventable if people had early warnings of severe weather, deployed inexpensive nature-based solutions, had better infrastructure such as flood defences or access to water in case of drought, and governments had more awareness of which areas were most vulnerable.

Visiting rural areas in the Awdal region reveals how the building of a covered rainwater tank after the 2017 drought is helping to bridge dry seasons. A pilot farm which Concern set up with Irish Aid support nearby confirms crop diversification pays and increases food security. A simple net and steel frame enables a nursery and seed bank to be built. A plastic-lined pit retains rainwater and helps to keep crops alive during dry periods.

The operation is headed by a lead farmer, “the local centre of learning”, who trains others. Some come to observe out of curiosity and so moves away from monoculture take root.

In Korji village, the lead farmer is Abdi Karim. His nursery includes beetroot, spinach, papaya and citrus. His 60,000-litre pit connects to a steel tank in his main field which, with perforated plastic piping, makes drip irrigation possible. Success means, he adds, he is likely to be able to reinvest in the business and build another pit. This is not complex engineering.

The most high-tech action is perhaps a move to use mobile phones in an early warning system for those living in remote areas.

Ismail says: “If you ask people, ‘What can we do for you?’ The answer is always the same: water, water, water.”

Rich countries declaring a climate emergency is all very well, but here one can see the dynamics of a global climate injustice. More frequent climate shocks for Somaliland are forecast as populations which have contributed least to unprecedented levels of human-induced greenhouse gases emissions suffer most.