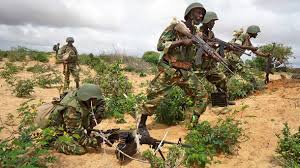 Cash from African Union Mission in Somalia (Amisom) in the 12-month period was nearly half the Sh8.5 billion the Treasury had budgeted for.

The 28-nation EU, the largest contributor of funds to the Amisom through the African Peace Facility, in April pledged to continue supporting the AU mission’s programmes and activities in financial year 2019/20.

The EU funds cater for allowances for the Amisom troops and police, international and local civilian staff salaries, operational costs of their offices, among others.

The United Nations Support Office in Somalia (UNSOS), on the other hand, provides logistical field support to the Amisom troops and Somali National Security Forces during joint operations.

The United Nations has, however, been facing a record cash crunch, which its boss Antonio Guterres warned at the beginning of the fiscal year in July 2018 would affect the delivery of its mandate if not expeditiously addressed.The Federal Government of Somalia is, together with partners implementing the Somalia Transition Plan, backed by the UN Security Council and the African Union, aimed at transferring security responsibility to Somali National Security Forces ahead of Amisom’s planned exit in 2021.

Kenya had signalled gradual withdrawal of her troops from the war-torn nation after it slashed the estimates of reimbursement from the Amisom for the year ending June 2020 by 41.17 per cent, compared with estimates for a year earlier.

The Treasury expects refunds of Sh5 billion this financial year in the year starting July, the least amount in the past five years, cash inflows which will fall further in subsequent year.

About 4,000 Kenyan soldiers are part of the Amisom, presently headed by Ethiopia’s Lt Gen Tigabu Yilma Wondimhunegn. Conservative estimates shows the international community pays $1,028 (Sh106,706) for each soldier per month. Their respective governments then deduct about $200 (Sh20, 760) for administrative costs.