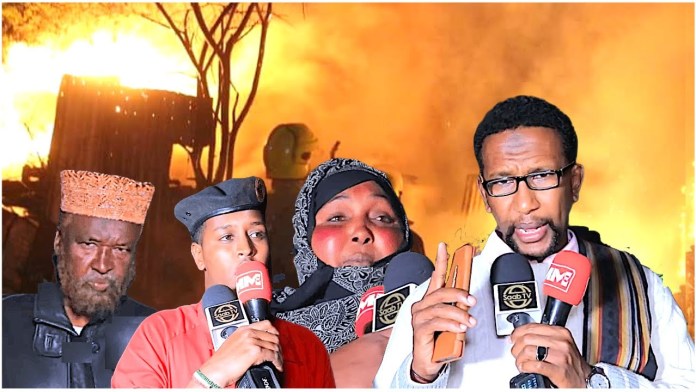 The Fire Brigade department of the police has appealed to the members of the public to cooperate with them in efforts of dowsing fires whenever and wherever it happens.

The call was made by a spokesperson for the department on the night of 30/31st July 2021 at a scene where fire razing home claimed the lives of two boys in Dami estate in new Hargeisa district within the city.

Despite the details of the blaze having been sketchy, rowdy and wayward youth took to pelt the fire department police personnel resulting in casualty of one of them who has been hospitalized, according to the spokesperson.

At the scene was somber and sad Barkhad Jama Batun who incidentally happens to be a grand-uncle to the two children who perished in the fire.

He apologized to the fire officials for the unruly welcome accorded (on behalf of the gathered family, relatives and friends of the afflicted) and termed the pelting incidence as hooliganism by wayward youth who were overwhelmed by their emotions after losing the children to the flames.

The spokesman reminded motorists to adhere to the rules of apt road use as far as emergency vehicles with blaring sirens are concerned. He however thanked the Dami residents for having worked with them in putting off the fire.

He extended the same gesture of gratitude to the general public as a whole whom he vouched for their concerted efforts of selflessness in cooperating with the department time and again.

The fire brigade sector is regarded and held dearly by the populace as one of the best departments in their services dispensation to the public by being swift, diligent and brave.