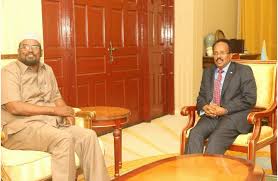 The political battle pitting the Somalia federal government against Jubbaland state appeared to worsen this week after Jubbaland President Ahmed Islam Madobe announced he had “suspended” co-operation with Mogadishu.

After a meeting with his council of ministers, Sheikh Madobe told local media there will be no further engagement with Mogadishu until the issues around electoral planning are sorted out.

The government in Mogadishu under President Mohammed Farmaajo, he said, was trying to manipulate the local elections scheduled for August 24.

The exact method of manipulation wasn’t clear, but it came just as Sheikh Madobe tightened the programme for elections in the federal state, despite protests from Mogadishu about the composition of a key electoral elders council.

Last week, President Farmaajo’s office said it will reject the list of elders published by the Jubbaland Electoral Commission because it included people not cleared by security agencies.

A statement circulated to the media said the list of 60 elders included members “not registered” by the security agencies and that it will not be acceptable to conduct the elections.

“Their concerns are baseless,” said an aide of Sheikh Madobe.

“The Provisional Federal Constitution says elections for legislative and executive bodies in federal states is to be managed by constitutions of the particular federal state. This is what we are doing,” said the aid.

The elders council is a key body in the electoral process. According to local laws, the Council, selected by the electoral commission based on clan balancing ratios, is supposed to select candidates for the 75 parliamentary slots to sit in the Jubbaland Assembly.

Ideally, the elders will nominate three candidates per post, using criteria that has not been published and which may mean the Council will have leeway to toss out candidates deemed unfit to contest.

The Council will then send the 225 names back to the electoral commission, which will pick one from each set to form the 75-member Jubbaland parliament which will then vote to elect the president on August 24.

Though the Commission amended rules for presidential contenders, the criteria for selecting the three candidates into parliament is largely into the hands of the Council, causing friction between Mogadishu and Kismayu.

The rules also require candidates to prove they have been resident in Somalia continuously for the past two years or more.

President Farmaajo’s issue with the Council is that the group includes people who have not been passed through proper selection and may hence favour the incumbent. In addition, the electoral commission will have final say on who, among the three candidates, will be nominated to parliament.

Mogadishu expressed reservations with the rules which included paying a fee of $30,000 for male contenders and $15,000 for female contenders who must have at least a university degree and have served in leadership positions for at least a decade.