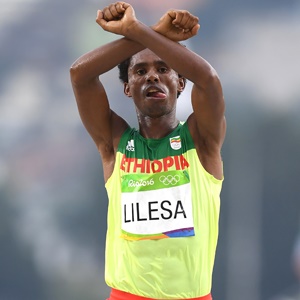 Lilesa has lived in self-imposed exile in the US since 2016 when he raised his arms in a gesture against government repression while crossing the finish line in second place at the Rio Olympics.

Ethiopia’s Olympic committee and athletics federation penned the joint letter seeking Lilesa’s return and asking him to resume his athletic career in, and for, the country.

“Athlete Feyisa Lilesa has scored great results at the Rio Olympics and other athletics competitions enabling Ethiopia’s flag to be hoisted to great heights,” the letter said.

“We want Lilesa to return to his home country to resume his athletics competition and upon his return we are prepared to give him a hero’s welcome.”

Lilesa’s dramatic crossed-wrist protest made headlines and shone the spotlight on a sometimes brutal government crackdown against Oromo protesters.

The runner has continued to train and run but has ignored previous offers of a return home.

However, new prime minister and fellow Oromo, Abiy Ahmed, has since April announced a series of fundamental reforms aimed at addressing long-standing grievances across the nation.

He has lifted a state of emergency, released political prisoners, delisted “terrorist” groups including the Oromo Liberation Front, criticised brutality by security forces and moved to open up democratic space.

There was no immediate response to the offer from Lilesa.