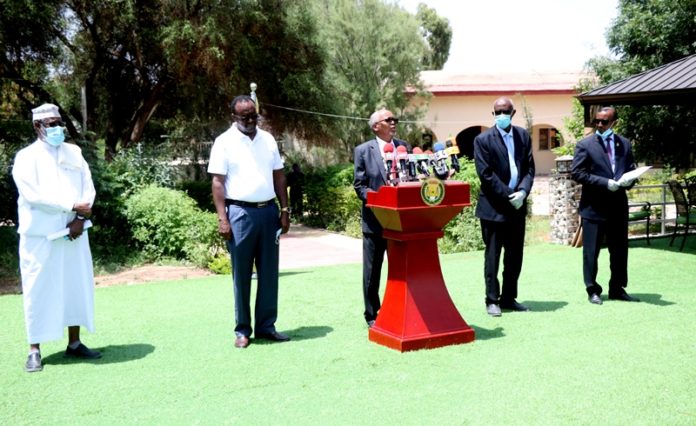 The Covid-19 National Secretariat and Coordination Centre yesterday released a report on the financial and facilities aid and grants received by the secretariat since its inception.

The assistance was in forms of grants and alms, both in cash and in-kind from the state, international governments, INGO’s, LNGO, multinational companies, local ones, and from patriotic Somalilanders.

Read the translation of the full report published hereunder:-

Report on the financial grants and facilities received by the COVID 19 National secretariat.

The government of the Republic of Somaliland earlier in the year commenced a national plan to prevent and combat  the coronavirus COVID-19 pandemic when its fatality become clear to the nation as it wreaked havoc across  world.

Apart from the government’s efforts in the process, the indispensible members of the public played an important role in a concerted manner to combat the malaise are noteworthy.

It is, thus, the President H.E Musa Bihi Abdi created a national task force to the cause so as to marshal a national plan against the COVID-19 pandemic.

In the same breath the Head of the State directed the establishment of a national fund as a safety net for the COVID-19 impact on the national health, economic and to the society.

The government deposited 1.5 million USD, to this account to prepare and execute prophylactic (preventive) measures in combating and the management of health impact by the COVID-19.

These would entail dissemination and public awareness of the pandemic, executing duties, medicinal drugs, and associated facilities.

The government deposited 1 million USD to this account to assist in nutritive requirements for 20,000 families for the specific covid-19 affected ones. This group is part of 60,000 families which the secretariat and declared earlier that they would be supported.

It is noteworthy to point out that the compatriot entrepreneur, fraternity, corporations and NGOs have participated in the joint efforts concertedly, in the alms giving to the needy families affected by the pandemic.

This week will see the distribution of the food stuff to the needy as a first phase of the programme directed to the 40,000 families. The duties of the distribution have been decentralized to regional and district committee levels that would be accountable.

This account has been earmarked by the government to aid small traders, in the long run, who have been affected by the pandemic in various ways such that they were hurt economically.  It is a 1 million USD account.

The state is appealing to international organizations, entrepreneurs, and Somalilanders to eke in their support.

With 1 million USD (1,000.000) earmarked for this account, the government is expecting to make an incentive to subsistence farmers. The produce of the farmers from the previous planting seasons would be bought by the government hence, God willing, will go to support those affected by the pandemic.

To this effect, the ministers of Agriculture and that of the Finance and Chairman of the National Disaster preparedness and Food Reserves Agency have been directed to execute this plan.

Aid Received by the Secretariat or those Pledged

The founder of World Remit has aided the Republic of Somaliland with 1 million dollars (1,000,000) worth of health related implements, e.g. the facial masks, hand gloves, sanitizers associated appliances, to be used by health attendants- doctors, nurses, and paramedics- in the frontlines of combating the malaise.

The secretariat however wishes to inform the members of the public that apart from a few masks, gloves and sanitizers received from corporation, the majority of the implements are on its ways to the country.

It is also ascertain the fact that the founder of World Remit has not handed any cash to the secretariat.

On the 10th of May 2020 the Telesom Group pledged facilities and implements worth 640 thousand dollars ($ 640,000) which they said would reach the country in the coming weeks.

The Group gave a grant of 200 thousand USD (200,000) to go the account of aiding the needy people affected by the pandemic.

On the 17th of May 2020, the group pledged to support the cause with health facilities and implements worth 600 thousand USD ($ 600,000) which is yet to be received hence is expected as soon as possible.

The group granted the secretariat 200 thousand USD ($ 200,000) cash which they earmarked to the cause of apurchasing foodstuffs for four thousand families.

This amount was handed over to the Endowment Committee for COVID-19 which comprises of entrepreneurs and clergy members named by the Vice President of the Republic.

Abdirahman Boore handed over $ 100,000 USD which he earmarked for aiding health activities and a further $ 70,000 USD to the Nation Disaster Preparedness and food Reserves Agency *(NADFoR) for the purchase of food stuff.

Governments, Agencies, Corporations and Organizations which aided facilities and implements in the fight against COVID-19.

Generally the cash the government planned and earmarked for the four fund accounts is $ 4.5 m USD (four and a half mi8llion dollars) as depicted in the table.

On the other hand the $ 500,000 (half a million) dollars cash given by Abdirahman Bore and the two groups of Telesom and Dahabshiil would go to the purchasing of foodstuffs for the needy, ( $ 200,000) of which has been handed over to the Endowment Committee.

$ 100,000 of the remainder would go to the Health activities fund of the secretariat.

It is worth noting that the Endowment Committee for COVID-19 is charged with the task of fundraising from local entrepreneurs and trades for the aiding of the needy and they would give their account expectedly.

The COVID-19 National Secretariat and Coordination Centre herein invokes the name of the President of the Republic on behalf of the government and people of Somaliland in extending their note of thanks to those who asserted efforts in concerted manner to boost the Secretariat for its cause of combating the COVID-19 pandemic.

The Secretariat especially grateful to the Founder of  World Remit Mr. Ismail Ibrahim Mohamed, Chairman of Telesom and Dahabshiil Groups Messrs Abdirahman Mohamed Iid and Mohamed Said Duale and Mr. Abdirahman Boore for their patriotism, kinship and spirit of sharing that they have extended and depicted to their people and their country at this trying moment of hard times.

The report was undersigned by the Executive Secretary of the Secretariat Hussein Adan Egeh (Deyr).