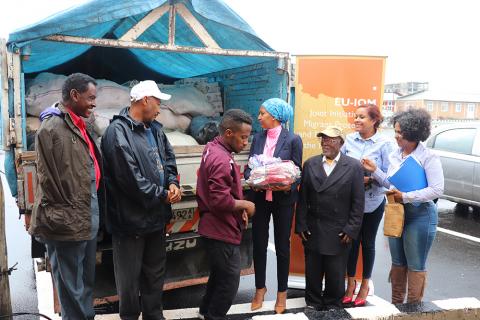 Addis Ababa – Sixty-one-year-old Mebratu Teshome spent 10 years in Somalia. He is the first elderly migrant returnee to find a permanent home at a shelter in the Ethiopian capital.

When he arrived back in the country, he was psychologically unstable and received tailored counselling and psychiatric assistance at the IOM-run migrant transit centre situated near Bole International Airport.

Mebratu did not have a recollection of his family and could not comprehend conversations well. Unable to make simple movements, his severe condition called for specialized assistance at a mental health hospital in Addis Ababa. He stayed at the IOM facility prior to his referral to Mekedonia, a home for the elderly and mentally disabled, run by a local NGO.

Ethiopia accounts for the largest migrant movements in the Horn of Africa, with the Arabian Peninsula, Europe and South Africa being among the target destinations. Elderly migrants like Mebratu are few and far between. Yet they are often among the most vulnerable, along with minors and women.

According to IOM data on returnees from Saudi Arabia, since May 2017 a total of 253 Ethiopian returnees from the Kingdom were above the age of 60. This is a small number compared to the overall caseload of 246,000.

To address the needs of older migrants IOM in Ethiopia has partnered with the Mekedonia Home for the Elderly and Mentally Disabled. The agreement has been reached through the EU-IOM Joint Initiative for Migrant Protection and Reintegration.

The home has begun taking in older migrant returnees who are unable to return to their communities of origin or who have lost their memories and cannot recall their families’ whereabouts. Mentally disabled migrant returnees with similar cases are also referred to the centre.

Such returnees can stay at Mekedonia for an unlimited time, occupying themselves making handicrafts, traditional scarves, carpets, brooms, wax candles, among other items. There is also a library on the premises.

Residents with skills and practical work experience are able to work in any of the centre’s different units in line with their skills such as in administration, at the reception or in the kitchen. The centre has organized a space for elders with teaching experience to teach basic literacy skills to other fellow residents.

Since 2018, 10 Ethiopians between the ages of 60 and 80 have been assisted to return from Somalia and Sudan. But not all of them need to be accommodated at the shelter.

Sara Basha, the head the EU-IOM Joint Initiative in Ethiopia said: “In addition to the partnership with Mekedonia, IOM is partnering with 10 other NGOs to provide needs-based reintegration support to returnees including elders in Amhara, Tigray, Oromia, Southern Nations Nationalities and Peoples’ Regional states and the capital city, Addis Ababa. Over 2,000 vulnerable returnees are expected to be assisted through this partnership.”

The EU-IOM Joint Initiative facilitates orderly, safe, regular and responsible migration management through the development of rights-based and development-focused procedures and processes on protection and sustainable reintegration. Backed by the EU Trust Fund, it covers and has been set up in close cooperation with a total of 26 African countries.

Raji Dinsa, a project coordinator at Mekedonia, said that shelter is due to begin work on a hospital and a nursing home. “There is a huge demand for similar facilities in the city and in the country in general,” he said.

Dinsa added: “It is very humbling to be able to support the elders at our centre. They come from different backgrounds and many have seen better days in their lives.” 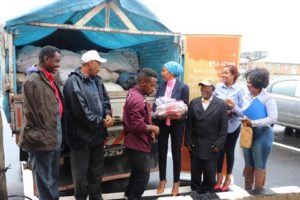 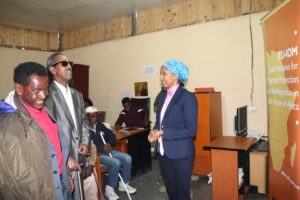