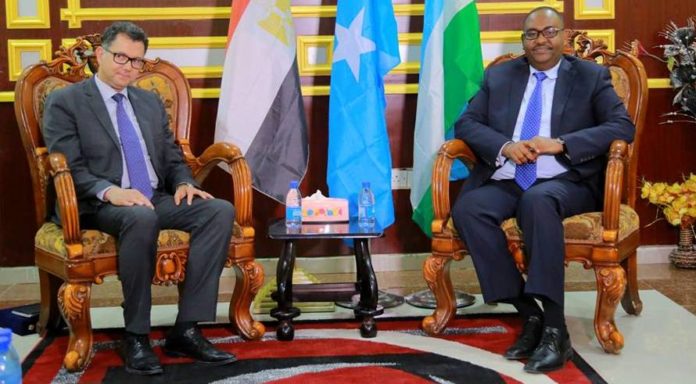 Egyptian Ambassador to Somalia has started a three-day visit to Somalia’s Puntland State on Monday exploring trade and development relations between Somalia and the Middle Eastern country.

In a statement by the office of the president of Puntland, the Egyptian ambassador, Mohamed Ibrahim Nasar and president Said Abdullahi Deni have discussed areas of potential cooperation including trade, development, health, education, justice and fisheries and sea resources.

“The ambassador of the brotherly nation of Egypt and his delegation have visited us today. We are grateful to the ambassador’s endeavour to strengthen the relations and cooperation between Somalia and Egypt,” said the statement.

Both sides have had the first phase of the discussions, according to the statement, which will follow a second part in the following days as the Egyptian ambassador and his delegation were set to visit Bosaso, the region’s port town and commercial hub.

Ambassador Nasar on his turn thanked Puntland officials he met while also emphasizing his country’s ties with Somalia as a one built on mutual interests and brotherhood.

“I am the ambassador of Egypt to Somalia and I am leading a large delegation. Our visit is based bilateral trade relations between Somalia, particularly Puntland and Egypt and the potential Egyptian assistance to Puntland towards education, health and security,” said ambassador Nasar.

The ambassador has underlined Egypt’s interest in the Somalia relations and the historic ties the two countries share which started in the era of Ancient Egyptians during the Early Dynastic Period.

“During our stay in Puntland, we shall meet various departments of Puntland Government. We shall visit several places,” the ambassador added.