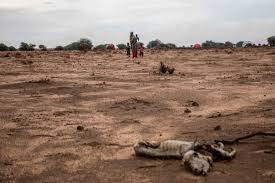 JUNE 18 – Failing and intermittent rains are wrecking havoc in Somalia and Somaliland, but we are increasingly asking, is anyone listening? 2.2 million people are facing extreme hunger and 5.4 million need humanitarian assistance as of May’s end. It’s a staggering 15% increase from 4.6 million in December.

Small-scale emergency funding was recently disbursed, but is inadequate for such vast needs. “This massive spike in people requiring humanitarian assistance shows just how fragile the situation is for millions of Somalis. A huge injection of funding is urgently
needed to save lives. We know early intervention is the best and most cost-effective way to save lives, particularly for women and children, who are always the most atrisk,” says Amina Haji, Executive Director of Save Somali Women and Children. As needs become clearer, the UN, national and international organisations and Somali authorities are consistently raising the alarm, yet the response remains muted. Recent weeks saw some intense, short rain in some locales, which although replenishing some water sources, also caused extensive flooding and damage. For the majority of Somalis dependent on livestock, who saw their herds decimated in the 2017 drought, there are few animals left to capitalise on any new pasture. Agricultural production is also severely reduced. It’s hardship upon hardship for vulnerable Somalis. The situation is dire and only predicted to get worse.
We adhere to a ‘no regrets’ policy rather than a ‘wait and see’ approach that is often too late. We are already acting, but are restrained by lack of support. We already have a catastrophe, but there’s time to avert the very real possibility of mass starvation. A massively scaled up response is urgently needed. As a platform for local NGOs working closely with communities, we expect maximum funding to be channelled as directly as possible to local organisations to maximise impact. “The international community has the commitment to increase humanitarian funding to local actors, and nowhere is this more relevant. Local civil society bears the highest security risks to deliver life saving assistance to communities that we know best through our daily outreach. Commitments towards the localisation of aid must be upheld to ensure the best possible response and maximum benefits for extremely vulnerable communities,” says Degan Ali, Director of Adeso.
We must collectively step up to the challenge with context specific, long-term and locally driven solutions to problems facing Somalis. This is exactly the reason Nexus was formed: to respond as a locally led and highly diverse platform of nine local organizations with an average of over 20 years of experience working directly with all communities in some of the most hard to reach areas of Somalia.
Nexus is a platform for locally led change, pioneered by Adeso, CPD, GREDO,
HAVOYOCO, KAALO, SSWC, SADO, TASCO and WASDA, with support from
Oxfam and Save the Children. Nexus: Strong Together.
Contacts:
Chair: SSWC. Halima Adan. halima@sswc-som.com
Deputy-Chair: Oxfam. Dustin Barter. dustin.barter@oxfam.org