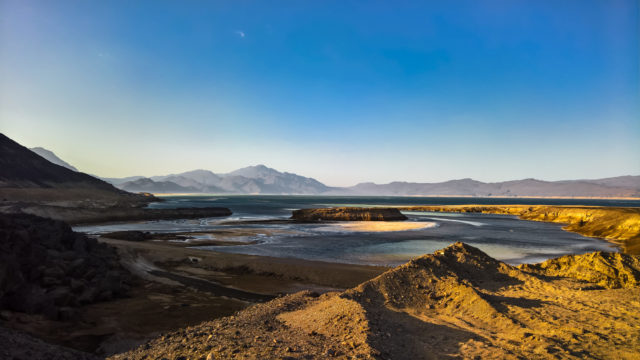 The small East African country of Djibouti has become a significant military base for various world powers.

Growing tensions around the Red Sea and the Gulf of Aden have drawn competing international powers to Djibouti and highlighted the Gulf countries’ keen interest in the region. Djibouti’s strategic location on the Horn of Africa has driven the U.S., France, and China to establish naval bases there to expand their tactical presence. The country currently hosts five military bases, in addition to a few others scheduled to be built in the future.

Since rising to power in 1999, President Ismael Omar Guellah opened up the economically fragile country to foreign powers seeking to lease land for military bases. In return, the autocratic leader, who reformed the constitution in 2010 to expand the powers of the presidency and remove term limits, gained their support.

The relative stability that Djibouti enjoys has significantly increased in comparison to its neighbors, Ethiopia in the west, Eritrea in the north, Somalia in the south-east, and Yemen in the north-east. With an area of 23,000 square kilometers and a population of less than one million, Djibouti is strategically located on the Bab el-Mandeb Strait, which connects the Red Sea to the Gulf of Aden.

Linking Africa and the Middle East and opening out to Europe via the Suez Canal in the north, the Red Sea is of particular interest to the global markets: it is the main passageway for Gulf oil to reach North America. The Suez Canal is the shortest commercial route to Europe, but its proximity to countries in turmoil, such as Yemen and Somalia makes the route dangerous and fragile. Djibouti’s advantageous position also allows landlocked Ethiopia to use it for 95 percentof the goods it imports.

A Theater for Military Powers

For centuries, powerful countries have fought over Djibouti. During the European scramble for Africa in the late 19th century, France colonized Djibouti, while Britain also tried to take control of its coastal areas. When Djibouti gained independence from France in 1977, the French kept forces stationed there under a bilateral defense protocol. With 5,000 troops, Djibouti is France’s largest overseas base, also hosting German and Spanish troops.

Following the bombings of the U.S. embassies in Nairobi and Dar es Salaam in 1998, the bombing of the USS Cole ship near the coast of Yemen in 2000, and most significantly, the 9/11 attacks in 2001, Washington began paying $63 million a year to lease Camp Lemonnier for use as a U.S. Naval Expeditionary Base, along with the right to use ports and airports in Djibouti city. Lemonnier, which is the U.S.’ only permanent military base in Africa, has 4,000 American troops.

Lemonnier, which hosts British military personnel as well, is also the home of the marine-based Combined Joint Task Force-Horn of Africa, a joint task force of the United States Africa Command (USAFRICOM).

The Trump administration fears China’s expansion in Africa. Over the past two decades, China has actively engaged in African trade, investment, and aid. Since China began countering piracy in the Gulf of Aden in 2009, Beijing has permanently deployed its navy forces, paving the way to formally open its first overseas military base in Djibouti in 2017. China pays $20 million annually to lease the base.

Several countries rushed to buy land in Djibouti after Somali pirates gained prominence in the Gulf of Aden in the mid-2000s, threatening the shipping industry.

Several countries rushed to buy land in Djibouti after Somali pirates gained prominence in the Gulf of Aden in the mid-2000s, threatening the shipping industry. Italy joined its NATO partners in 2009, establishing a small military base with 300 personnel. The Italian government said that its base in Djibouti was “a permanent outpost in an area of ​​enormous strategic importance.” Italy’s establishment of a Djibouti base came at the same time as the launch of the European Union Naval Force (or Operation Atalanta) to protect vessels from armed piracy at sea off the Gulf of Aden and the Indian Ocean.

Similarly, Japan opened its first overseas base since World War II in Djibouti in 2011. The base has 1,200 troops and is situated next to Camp Lemonnier. Japan’s Djibouti base is dedicated to curbing piracy, but is also intended to expand Tokyo’s influence and counter China. In addition, Saudi Arabia, and its ally the United Arab Emirates (UAE) have geared up to gain a foothold in Djibouti.

Djibouti is a longstanding ally of Saudi Arabia. In 2016, it followed Riyadh’s lead and severed relations with Tehran. Djibouti is also a member of the Saudi-led coalition in Yemen. The alliance launched a military intervention in Yemen in 2015 to support the country’s internationally recognized government and fight the Iranian-backed Yemeni rebels, the Houthis (also known as the Ansarullah movement).

The perceived regional threat posed by Iran, along with its base in Eritrea, have doubtless contributed to Saudi Arabia and the UAE’s interest in securing influence in Djibouti and the surrounding area.

The perceived regional threat posed by Iran, along with its base in Eritrea,have doubtless contributed to Saudi Arabia and the UAE’s interest in securing influence in Djibouti and the surrounding area.

Saudi Arabia’s request in 2016 to build a base in Djibouti was approved by the Djibouti government a year later. The UAE already has military bases in Eritrea and Somaliland, an autonomous region of Somalia that has yet to achieve international recognition. Saudi Arabia and the UAE’s rival Turkey – a key ally of Qatar – has its biggest overseas military base in Somalia’s Mogadishu where more than 10,000 Somali soldiers receive training.

To consolidate its control over the Red Sea and the Gulf of Aden, Saudi Arabia is preparing to create an alliance of six Red Sea-adjacent Arab and African nations: Djibouti, Egypt, Jordan, Somalia, Sudan, and Yemen.

The presence of foreign military bases in Djibouti, however, is a double-edged sword for all involved parties. It benefits Djibouti in that it guarantees a level of stability and generates more than $300 million for the country annually. On the other hand, the country risks becoming a “nest of spies” where the international powers based there can watch each other closely. This congestion might also lead to friction among these powers, turning Djibouti into a battlefield.

Despite its size, Djibouti has leveraged its strategic geopolitical location to become a major hub for foreign powers seeking to increase their military presence.

So far, the land lease business to international players seems to be paying big dividends in the form of cash, infrastructure, and economic opportunities for Djibouti, a barren nation with no resources. It is no wonder that it is looking to expand this lucrative model to other nations, such as Russia, Turkey, the UAE, and India. The challenge is to keep all those often-opposing interests in check and maintain peace among rivals.