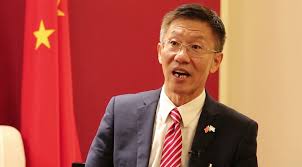 Officials at the ministry of foreign affairs of Somaliland greeted Qin Jian upon arrival at Egal Airport.

The mission behind Hargeisa’s visit paid by the Chinese envoy stationed in Mogadishu remains unknown.

The visit comes a month after Somaliland & Taiwan officially announced that they signed a bilateral agreement aimed at boosting the ties between the two countries.

Taiwan seceded from Mainland China while Somaliland recaptured its indepedence from Somalia’s failed state in 1991.

China was furious over Taiwan’s reach to Somaliland while Somalia condemned move.

It is not obvious if Qin Jian will meet with Somaliland President Musa Bihi Abdi.