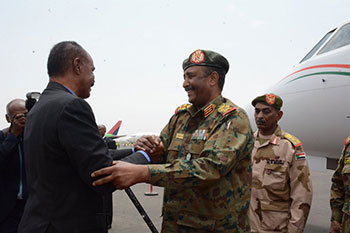 Asmara, 14 June 2019- The Chairman of the Transitional Military Council (TMC) of Sudan, Let. Gen. Abdul-Fattah Al-Burhan arrived in Asmara in mid-morning hours of today, June 14 for a working visit to Eritrea.

At a meeting the two leaders conducted extensive discussion at the State House, President Isaias expressed Eritrea’s support to the popular Sudanese uprising.

President Isaias also applauded the Sudanese Armed Forces for its pivotal role in taking sides with the population at a crucial moment thereby enabling the country to return from the edge of collapse.

President Isaias further underlined the need for all Sudanese political forces and population to participate in the perceptive transition phase the country is facing.

Lt. General Abdul-Fattah Al-Burhan, on his part, expressed his profound appreciation of Eritrea’s position on the Sudanese situation. This is “part and parcel of Eritrea’s constructive stance in the past and that reflects the historic and close ties of the two countries, the General stated.

Speaking to reporters, Presidential Adviser Mr. Yemane Gebreab said that the Government of Eritrea supports the Sudanese Transitional Military Council in its effort to bring peace and stability in the Sudan as well as to play its due role in this transitional period.

Ambassador Abdul M. Osman, head of African Affairs at the Sudanese Ministry of Foreign Affairs, on his part said that he has deep respect for the Eritrean stance that the issue of Sudan should be resolved by the people of Sudan. 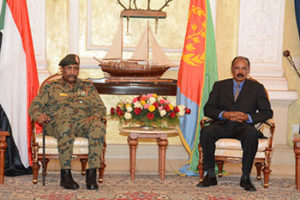 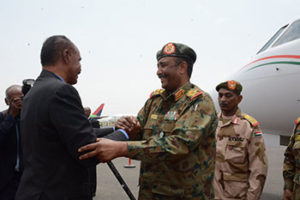