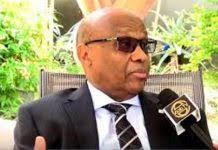 The Central Bank also has ruled out the possibility that it printed sh10,000 notes. This comes days after the central bank governor, Ali Ibrahim Jama Baqdadi reacted to concerns of the house of elders on the introduction of higher shilling denomination. The Bank of Somaliland is not contemplating and has no immediate plans to introduce a sh10,000 note. Indeed, the Governor, made it clear to the MPs that the Bank had no intention of changing its currency at the moment,” reads the press release from the Central Bank. The Central Bank pointed out that the bank reserves the right to print banknotes anytime if need arises. The governor reveals that the bank considers the plan in the pipeline which is aimed at switching shillings into plastic ones in the years to come. This would be in accordance with the by laws of the bank which is aimed at preventing the inflation to hike as far as the country ‘s economy is low ebb.