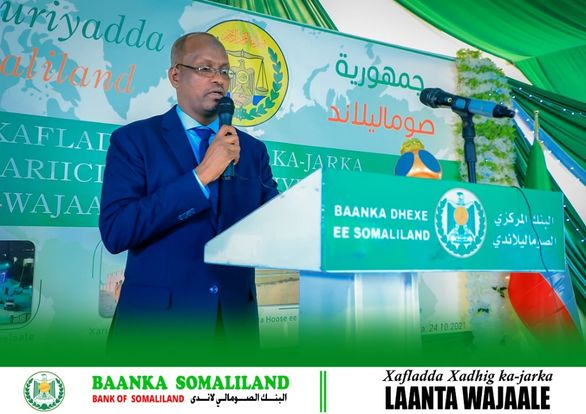 VP inaugurates CB branch and other project in Togwajale

The Vice President. Abdirahman Abdillahi Ismail (Seyli’i) inaugurated over the week a new branch of the Central Bank and various government projects in Togwajale.

Speaking at the opening of the branch, the VP said that due to the importance of Wajale town, various projects have been implemented and the central bank branch of Wajale deserves it.

Speaking on the question of why the government has implemented various projects in Wajale, he said, “Wajale was Somaliland businesses hub, and all businessmen have presence here”.

The Governor of the Central Bank of the Republic of Somaliland Eng. Ali Abdillahi Dahir underscored the importance the Central Bank to have its services in Wajaale while noting that as it was a major economic hub of the country and the second largest frontier port, while speaking at the inauguration ceremony of the   Wajale District branch.

He said the opening of the Wajale branch was of great importance to the local economy and the economy of Somaliland, being Somaliland-Ethiopia border and the largest trading hub in Somaliland

Eng Ali predicted that opening a new branch of the bank will bring new changes, as well as economic and developmental growth.

Governor Eng Ali criticized people’s attitudes towards Somaliland currency at the border markets, and advised the members of the public to value their national treasure. Number of accounts the businessmen and public opens at Wajale branch, or tax money deposited will be test district’s economy and their future projects prioritization, said the CB Governor.

He thanked the former Central Bank executive for the initiative and the establishment of Wajaale branch saying ‘we must thank them for their legacy, and achievements’.

He commended the Somaliland Exchange Traders Association and its chairman for their role of the Somaliland shilling to take hold and maintaining its value hence urged all money exchangers to register the branch.

“There are 14 commercial banks at Ethiopian side, we are ready to work with them to stabilize the economy,” he said, adding that, “If the currency value is stabilized and all black market activities will cease, it will thus strengthen the security of the two countries, so as their economy.”

On the other hand, the Director General of the Central Bank, Mr. Mukhtar Abdi Qulle, announced of the launch of an e-cashier service that will make it easier for Somalilanders to file their taxes and duties.

Speaking at the inauguration of the new Wajale branch, Mr Mukhtar,   said there were two major issues. First to connect businesses and the community to the various government service agencies, he added, adding that Wajale Bank not only provides savings services, but also provides e-cashier services.

Explaining what an e-cashier service is, the Director General of the Central Bank said that it allows the public and businesses to use their money directly in all regions of the country, from bank to bank. Everyone who has an account with the central bank or its branches has the opportunity to withdraw money from his bank account or deposit it in the bank using his mobile phone.

E-cashier service in collaboration with Ministry of Finance, will provide Wajale businesses and taxpayers the opportunity to use all their financial interactions with e-cashier.