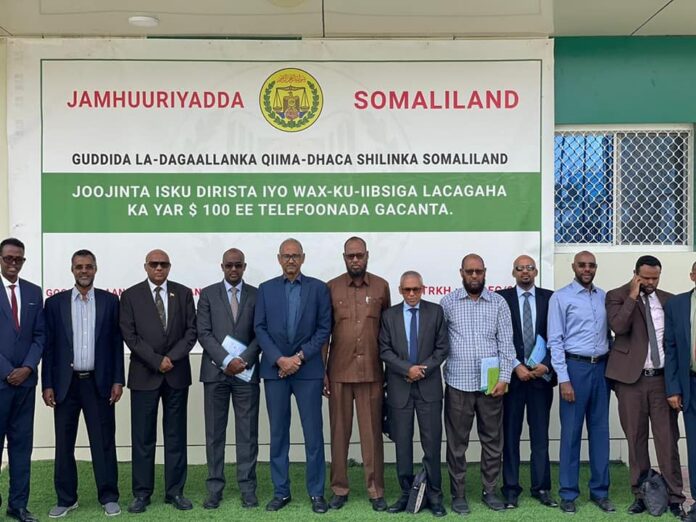 As a financial regulator, the Central Bank of Somaliland has taken important steps in the right direction to regulate the activities of mobile money operators in the area of converting shilling to dollar specially as a multi currency platform.

The Somaliland devaluation committee in a special meeting chaired by the governor of the central bank, Ali Ibrahim Jama “Baqdadi”, called on all SL mobile money operators to devise a means of sending and receiving less than 100 dollars in any transaction be it Iibso or Ku Iibso merchant package.

This financial policy if implemented will boost the value of SL Shilling against foreign currency.

Ali said: ” In 2017, there was a ministerial directive which outlawed the transfer or purchasing of less than 100 dollars via the Zaad, eDahab or mobile money systems. That decision by the government has brought many advantages to our economy. For instance, the inflation rate has come down from 19% to 4.4% as of November 2020. The SL Shilling has appreciated against dollar by 21% through the same period. The purpose of the meeting was that some telephone companies or mobile money operators have made some loopholes of the system. So we are trying to stop that loopholes in the future. We have unanimously reached to halt those loopholes.”

The policy according to him has been communicated to the operators before now and that its implementation is going to meticulously followed up and failure to comply in the future may lead to sanctions.

Ali said: ” As a regulator, we have two departments which follow up the companies adhered to the regulation and ensure that there are any loopholes. If there are any violations, we talk to them and give warnings. So far we have taken the decision to sue operators at the court but we make by consensus and we listen each other and we tell the loopholes and the violations and they stop it. If in the future they continue to break, there are penalties be it financial and others which apply later.”

The SL finance minister, Sa’ad Ali Shire, said it is high time the value of the shilling should rise against its biggest competitors and due to this the economy of the country will be boosted.

Sa’ad said: ” The purpose was to ensure compliance with the present decision to ensure that any amount less than 100 dollars in Somaliland should be sent in SL Shilling and not in US dollars. Since the introduction of that decision, the SL shilling has become very stable by strengthening against the US dollar. We just want to emphasize not the importance of that act and decision to ensure that in the future we keep in the support of SL Shilling and maintains its value. We have two impacts on the economy. Once it stabilizes the currency itself and the other thing is the stabilization of the inflation because if the currency devaluates then that leads to hyper inflation and that would hurt specially the people who live on fixed income particularly government employees. So it is in the benefit of everybody including mobile money operators as well because they hold a good amount of their money in SL Shilling so by maintaining the value of the currency is for the benefit of everybody.”