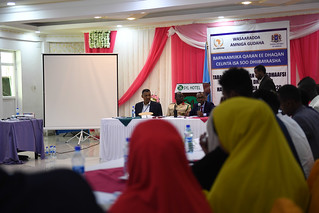 Mogadishu 11, December 2019 – The African Union Mission in Somalia (AMISOM) has conducted training for Somali government officials involved in the management and rehabilitation of ex-combatants.

The participants sought to share best practices and challenges of the Defector Rehabilitation Programme and how to forge ahead.

Speaking at the training, the Deputy Head of AMISOM, Simon Mulongo, emphasised AMISOM’s commitment to supporting the Federal Government of Somalia to rehabilitate former combatants.

“It should be in the national interest to end violence. Whoever wants to join violence should abandon the idea, return and work to make Somalia rise and shine again as a giant of the region,” Mulongo told participants.

According to the AMISOM Civil Affairs Officer, Fadil Karrar, the training was to enhance the capacity of the Defector Rehabilitation Programme for government officials, ministries, agencies, and security forces.

“The Defector Rehabilitation Programme has a national strategy and action plan for government officials, and the line ministries, to improve  engagement and collaboration,” Fadil noted.

The Director of the Defector Rehabilitation Programme in Somalia’s Ministry of Internal Security, Mohamed Ali Hussein, said the programme complements the President’s stand to offer amnesty to those that renounce violence.

“The national rehabilitation programme gives a second chance to ex-combatants from extremist groups like Al-Shabaab, enabling them to be remorseful and seek forgiveness,” said the director, Mohamed.

He emphasised that AMISOM is a crucial partner in providing training, equipment and resourcing for the rehabilitation of former combatants – an integral part of the National Programme for the treatment and handling of disengaged combatants in Somalia.

The chief of Somalia’s military tribunal, Col. Hassan Ali Nur Shuute, said that any ex-combatant that does not undergo rehabilitation is still an enemy.

“I urge all Police station commanders not to harbour ex-combatants in their respective districts without notifying the appropriate authorities for them to undergo rehabilitation,” said Col. Shuute.