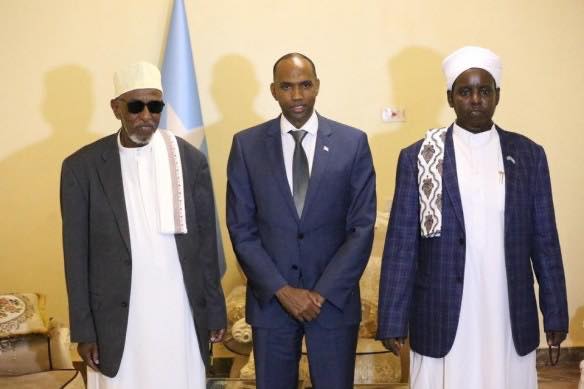 DHUSAMAREEB—Somalia’s Federal Gov’t on Thursday has reached a landmark deal with Ahlu Sunna Wal Jamaa that will allocate with the group of 20 seats in the new Galmudug parliament ahead of the expected polls.
The two sides have agreed to share the seats in what could end the renewal of wrangle ahead of the polls.
The arrangement will only be binding for the upcoming formation of Galmudug parliament.
Ahlu Sunna leader, Mohamed Shakir in a statement has lauded the accord with the SFG.
He said that we comprised for the sake of the interest of Galmudug.
Galmudug State assembly will be composed of 89 MP’s drawn from various clans inhabiting within the state.
An IGAD-brokered deal in December 2018 saw the inclusion of Ahlu Sunna into Galmudug state administration which paved the way for the expansion of parliament to over 200 MP’s.
The deal was not put into operation as the parliament was divided into two camps- one siding with Speaker Ali Dareed and the other with president Ahmed Haaf.
The selection of MP’s was due t begin in December, 9 and culminate the presidential poll on December, 23.
It is likely that the polls will be pushed to January 2020.