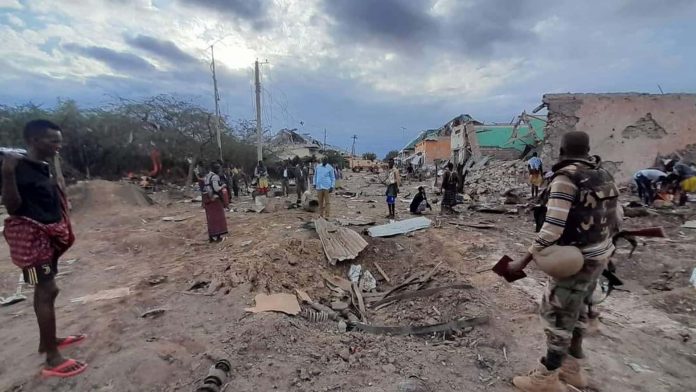 At least 20 people, including officials were killed on Wednesday in two explosions in the towns of Bulo-burde and Jalalaqsi in the central Somalia region of Hiran.

A vehicle packed with explosives was rammed into the headquarters of Jalalaqsi district on Wednesday afternoon, which resulted in the death of at least 15 people, the deputy commissioner of the district said.

Among those killed were the commissioner of Jalalaqsi Mohamed Nur Agajof Dabashe and the town’s mayor Adan Mohamed Eise, among other officials and soldiers, he added.

Meanwhile, three-wheeled rickshaw exploded on a main bridge in the town of Buloburde in the same region, partially damaging the bridge and killing at least 5 people.

A commander with the Somali army’s 27th division Hussein Borow told journalists that he had survived the attack but two of his bodyguards had been killed and another wounded. The blast also caused extensive damage to buildings nearby, including district headquarters, according to local media.

Al-Qaeda-aligned militant group Al-Shabaab said it had carried out both attacks targeting a gathering of Somali troops and Ma’wisley militias at a bridge in Bulo-burde town and a base housing Djibouti’s African Union peacekeepers.

The assaults came weeks after dozens of people had been killed in several suicide car bomb explosions on a military base housing regional presidential palace and provincial headquarters in the town of Baladweyne.