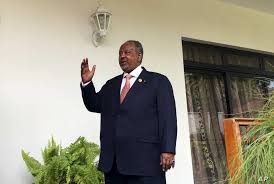 President Muse Bihi and his sycophant ministers seem to think that Djibouti dictator, Omar Guelleh, is our friend. But many Somalilanders do not agree, especially those who live in Gabiley and Guban areas.  Guelleh’s agenda includes control of Somaliland through its corrupt, greedy politicians and merchants such as the Minister of Water, Mr. Mohamed Muse Dirie. We must stay alert of Guelleh’s deception. We must replace the Kulmiye sheep with people who love our country and can stand up to Guelleh.

Guelleh is a despicable human being, hypocrite, and a coward. The only language he understands is force.

Anyone suggesting that other countries can learn from Djibouti or emulate it is delusional. Djibouti is not a free country. Djibouti has had only two presidents since its independence in 1977. Both are Masaasan of the Issa Clan. In fact, Mr. Guelleh was a handpicked successor of his uncle, Hassan Guleid Aptidon, the first president of Djibouti.

But those who want to become a dictator or admire dictatorship are taking a cue from Guelleh on how he made Djibouti a police state—where dissent or basic disagreement with him are dealt with harsh treatment or even killings. Most of its youth have been fleeing in droves and are claiming to be Somali refugees in Europe and North America.

Like Arab or African dictators, Guelleh’s smiling, avuncular face is all over scores of billboards across the capital’s dirty streets. But Djibouti state provides little or no services to its citizens who mostly live-in abject poverty -in a harsh hot, humid environment. They Lack access to clean water for hygiene or a place where women could deliver babies.

While Guelleh and his family, including his Ivorian Coast son-in-law accumulated wealth by robbing foreign aid and money from the leases of foreign bases.

Guelleh fears a free, democratic Somaliland from becoming the economic and logistics hub of the Horn of Africa. He is doing whatever it takes to make Somaliland fail, let alone allow people to thrive and live-in peace.

This week, there are unconfirmed reports that the Bihi administration has approved a plan for Djibouti to receive its water supply from Somaliland’s underground aquifers in western part of the country. If this report is true, this is dangerous and must be stopped or else we might not even have our country soon because greedy politicians are selling Somaliland piece by piece, including our precious natural resource—water.

During a stop of his tour in Guban area on his way back from Djibouti, President Bihi said, “Djibouti is helping Somaliland develop a salt plant in Toqoshi near Djibouti’s border and a port in Zeila.”

Does Djibouti have the know-how or the resources to execute such complex projects?  I think this a pipe dream, more likely, Guelleh will bring in the Chinese to take over the western Somaliland coast because most of Djibouti’s 2 billion debt is owned by China’s Import and Export Bank.

But how could Somaliland supply water to Djibouti when most of its people lack basic drinking water? This is ridiculous.

For example, in Hargeisa, the capital city, the majority of the city’s near one million residents have no access to piped water. The rest of the country also have water scarcity. For many, getting water is a daily struggle: those who are lucky enough to get water must walk long distances to fetch clean water. In some areas of the city, expensive hotels, and hospitals are without running water, so they must rely on water tankers for the delivery of water. People are not getting enough water to cook food, take showers, or even wash clothes.

Access to clean water in Somaliland is a luxury. The last thing Somaliland people need is corrupt politicians selling our precious resources to a dictator who hates us. This charade must stop.

Bihi was not the first president to appease Guelleh. Riyaale, Silanyo, and even Egal did the same or even worse. They conducted a weak foreign policy against Guelleh. But the worst damage was done by Egal and then his Interior Ministry Bihi. We paid a heavy price in terms of human cost to liberate the Guban region from a ruthless dictator, Siad Barre in the 1990’s.

In fact, when he was the Interior Minister, Bihi was responsible for removing SNM militias from the Guban region after pressure from the Djibouti regime in 1999. And now, as the president of Somaliland, under backroom deals, Bihi is giving away Guban region to the Djiboutian dictator, a man who he admires

If President Bihi has agreed to all those deals unknowingly, he is incompetent; if not, he is neglecting his duty to protect Somaliland interest.

What will it take for our leaders to stop Guelleh’s Somaliland encroachment?

If Somaliland leaders fail to protect the country, it is time for communities to organize themselves by any means to fight Guelleh and his enablers in Hargeisa and Mogadishu. We cannot call on the legendary Geedi Haame’s cavalry for help, who had protected Guban region communities gallantly from banditry. We must stand up to Guelleh’s Somaliland encroachment before it is too late.