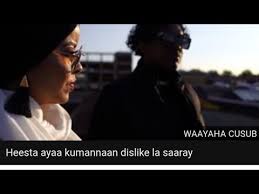 Falis Abdi, a popular Somali female singer who is a member of Waayaha Cusub band has featured a new controversial song which seems critical to the Federal government of Somalia and immediately Somali social media users have been caught up in the chants of the song that people have been talking about in different ways.

The song received thousands of dislikes in the YouTube which resulted the music band to hide people to view the number of likes and dislikes.

Waayaha Cusub co-founder Shine Akhyar speaks out the controversial song that is critical to the gov’t.

Shiine accuses the government of using thousands of dollars in tax payers money to fund an online hate campaign against the song.

Thousands of people have commented on this song.

Some have demonstrated their support to the government while others have thrown their weight behind the song.

On the other hand, a new song featuring Dalmar Yare, a former member of Waayaha Cusub band posted on you tube which seems to be a pro government as well as a response to the hit song.