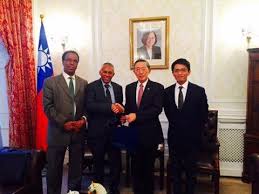 The United States has hailed the newly found diplomatic relationship between Somaliland and Taiwan describing it as a tremendous step.

In what may be seen as long shot by the United States in supporting the two nations, a tweet from the White House National Security Council indicated: “Great to see Taiwan stepping up its engagement in East Africa in a time of such tremendous need. Taiwan is a great partner in health, education, technical assistance, and more!”

This even as China, angered by the cooperation rebuffed and has condemned the move by saying that Taiwan is undermining the territorial integrity of Somalia.

Somaliland, a former British Protectorate earned independence in June 1960 and joined with Somalia until May 1991 when it broke away following the start of civil war and declared its own independence. It remains unrecognized by the United Nations.

But the statement from the White House National Security Council may be good news to both Taiwan and Somaliland whose battle to join the UN continues unabated.

Taiwan and Somaliland announced early this month they were entering into diplomatic relations that will see both sides open embassies in Hargeisa and Taipei respectively. The two governments have already identified the personnel to head and work at the respective embassies.

This week, the two countries started discussions on how they will cooperate on higher education.

Somaliland minister of education, Ahmed Mohamed Derie Torno met with Taiwanese representative to Somaliland, Lou Chen-hwa where they discussed on bilateral cooperation concerning the education programs between the two countries.

The two countries are also looking at working together in the fields of agriculture, mining, fishing, energy, public health, and information technology.