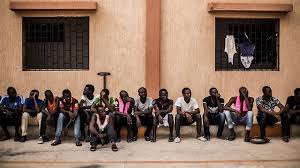 Ninety-six people were yesterday relocated to safety from the Zintan detention centre in Libya’s Tripoli to a Gathering and Departure Facility. The group were from Somalia, Eritrea and Ethiopia, and included two newborn babies.

UNHCR, the UN Refugee Agency is providing the group with food, shelter, medical assistance including psycho-social support, as well as clothes, shoes, hygiene kits and blankets. They will remain at the facility while they await evacuation outside the country.

Conditions in Zintan are dire. Living areas are severely overcrowded and lack proper ventilation. In some parts of the centre, toilets are overflowing and are in urgent need of repair. As a result, solid waste and garbage has piled up inside the cell for days and presents a serious health threat.

Tensions amongst the detainees are rising as they become increasingly agitated and desperate.

In total, 654 refugees and migrants remain held in Zintan. All available options must be immediately pursued to release the remaining detainees.

With no detention centre in Tripoli currently suitable for hosting refugees and migrants, in part due to the ongoing hostilities, UNHCR reiterates its call to the international community to carry out further evacuations of refugees out of the capital.

New detainees are being brought to the detention centres, after being rescued or intercepted off the coast of Libya, faster than the rate at which people are being evacuated.

More people (1,224) were returned to Libya by the Libyan Coast Guard in May alone than in the rest of 2019 combined.

Renewed efforts are needed to prevent people who are rescued or intercepted on the central Mediterranean from being taken back to Libya. Amongst other factors, the extremely volatile security situation inside Libya means there is no safe port in the country suitable for disembarking rescued refugees and migrants.