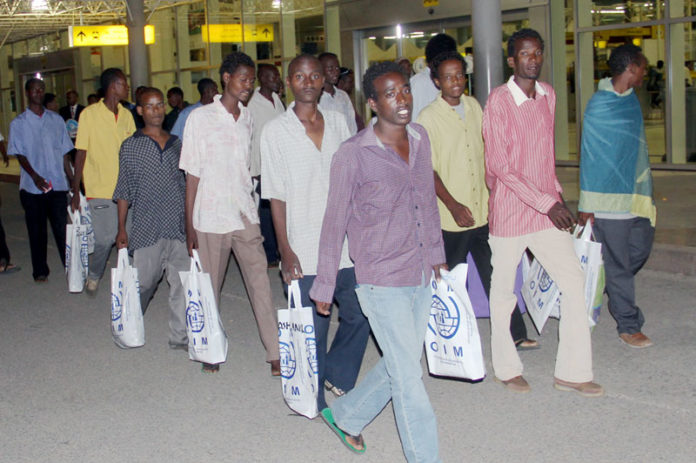 ADDIS ABABA, May 11  — The International Organization for Migration (IOM) said on Saturday that 222 illegal Ethiopian migrants were repatriated from the war-torn Yemen since Monday.

The migrants, who were voluntarily repatriated from Yemen’s capital Sana’a to Ethiopia’s capital Addis Ababa since Monday with the help of IOM, were “unable to continue to support themselves or fund their travel home,” the UN migration agency said in a statement on Saturday.

“The migrants were left stranded in a country experiencing a deadly conflict,” an IOM’s statement read.

According to IOM, the latest flight on Saturday brought back home some 46 Ethiopian nationals, increasing the total number of people assisted in the previous three flights since Monday to 222.

IOM also noted that “despite the ongoing conflict in Yemen, migrants seeking economic opportunities in Gulf countries continue to make the treacherous journey by land and sea to the Arabian Peninsula.”

“All along the route, migrants face many challenges in accessing protection and assistance. IOM is committed to supporting Yemen and the region in managing migration in a sustainable and humane way,” IOM said.

The latest repatriation efforts is said to be the first return movement to take place from Sana’a since mid-March 2019, said the UN migration agency.

“IOM was only able to resume air movements from Yemen in November 2018, having had to suspend them just after the conflict broke out in 2015,” IOM said.

Desperate Ethiopian migrants, who often attempt to cross the dangerous Red Sea route via neighboring nation Djibouti, regularly endure deadly incidents along the Red Sea as well as imprisonment and killings in the war-torn Yemen.

In recent years, the Ethiopian government has taken out advertisements in local print and broadcast media outlets to warn its nationals on the dangers of illegal migration, with only limited success.