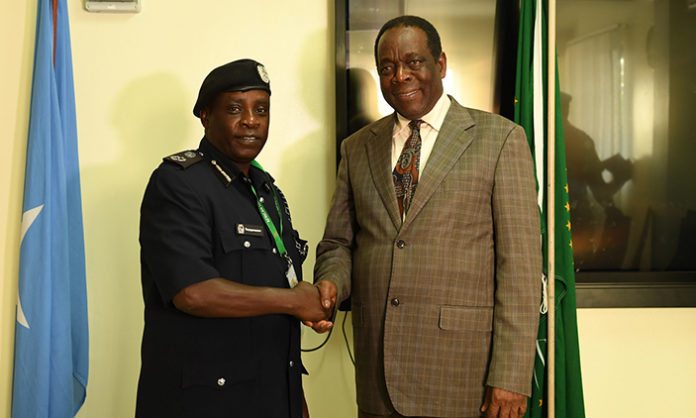 Uganda is one of the six police contributing countries to AMISOM and has a 160-strong contingent of formed police personnel deployed in Somalia.

The Director of Peace Support Operations in the Uganda Police Force, Assistant Inspector General of Police (AIGP), Grace Turyagumanawe, is leading a delegation of Police officers on a week-long working visit to Somalia.

Turyagumanawe held talks with the AU Special Representative for Somalia, Francisco Caetano Madeira at the Mission headquarters in Mogadishu, where they discussed policing, in the context of the AU Mission in Somalia.

He said he was in Somalia to carry out an assessment of personnel and audit the status of contingent-owned equipment.

“We have brought new spares, which we want to use to repair our machinery and put them to good use,” Turyagumanawe explained.

Uganda is one of the six police contributing countries to AMISOM and has a 160-strong contingent of formed police personnel deployed in Somalia; in addition to independent police officers, who mentor, advice and train Somali police officers. The police require sound equipment and mobility, to effectively fulfil its mandate.

“The equipment that you are going to repair, will be of extreme importance when undertaking mentoring operations; taking our people for training; helping with patrols and escort duties,” noted Ambassador Madeira. “This will increase the effectiveness of the police,” he added.

The AU Mission is seeking to deploy to Somalia additional police officers to boost the numbers in the Formed Police Units, in line with the United Nations Security Council Resolution 2431(2018), which recommends an increment in numbers of formed police personnel in the Mission. Ghana and Djibouti have offered to provide the additional numbers required.

While in Somalia, Turyagumanawe and his delegation will also assess the welfare of the police contingent from Uganda.