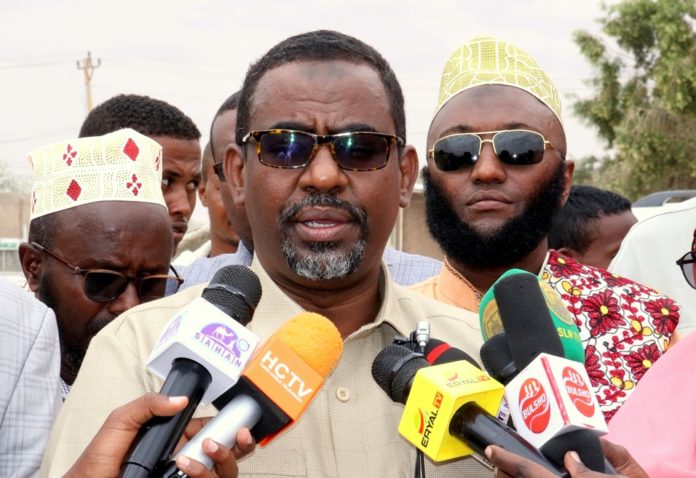 The Minister of Transport and Road Development, Hon. Abdillahi Abokor Osman, speaking at an event in Burao, responding to concerns raised by traditional elders and scholars in Awdal Region on the distribution of seats in the House of Representatives were inconsistent with the electoral system and the laws of the land.

Hon. Abdillahi Abokor Osman said that long were the days clans demanded their share of seats in the House of Representatives, Elections system is based on a person and a vote, and the distribution of seats depends on the number of registered voters in each region.

The Minister also noted that its Maroodi Jeh and Togdheer regions should be complaining because they’re getting their equal share of seats in parliament and we have our constitution since 1991, and since 2002, we have moved to a Multi-Party system of Democracy.I believe that Awdal is the region with most complaints but I would like to remind them that we adopted when the former President Dahir Riyaale Kahin who hails from Awdal was ruling the country.

He added, “In 2005, the sitting members of the House of Representatives passed a law on election which didn’t include the proportional distribution of seats, but the argument at the time was that in order to standardize the representation of the regions, we had to conduct a population census, the census was not possible due to time constraints. The parliamentarians voted by a two-thirds majority (Absolute Majority Vote), the president then did not have the power to refer the law back to Parliament, but he had the right to refer it to the Constitutional Court for a legal debate on the issue.

The Constitutional Court ruled that the election should be held as it was in 1960, and the government ordered a census. “The statistic is long overdue,” he said, adding that he wanted to convince the public of the so-called shareholding.

The minister went on to say that the registration of one of the candidates could be based on the election of representatives.

“But we have a census that we can use today. I believe the two regions that are most affected by the current system are Marodi-jeex and Togdheer. In Marodi-jeex, 42% of Somalilanders vote higher, and it means “It has 34 seats, and the Togdheer region, which currently has 15 seats, has 18 seats in terms of the number of registered voters in the 2017 elections.”

Minister Abokor spoke directly to the Awdal community, reprimanding them. “Unfortunately, the two regions that would have contributed to the debate today are not talking about so-called representation, but it is a shame for a self-respect person “We believe that Awdal region has it’s full representation in the national assemblies.The upcoming election should not be disrupted. It is not possible for us to adopt this democratic system,” he said.

Lastly, the Minister stated that each region would have its own number of MPs according to the current census, but it was not possible for a region to seek a share in a clan-based or other way that was anti-democratic.