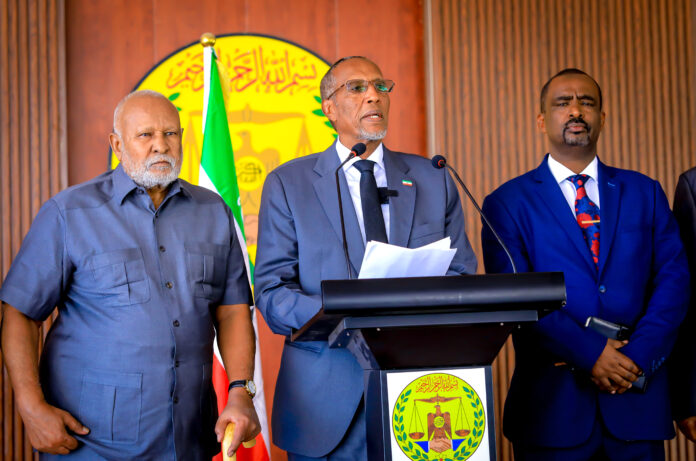 He announces concerted national efforts in addressing the Sool issues

-Warns Puntland against its declaration of war against Somaliland

-Cautions Somalia against interfering with the country’s internal affairs

The President of the Republic of Somaliland H.E. Musa Bihi Abdi has categorically stated that Somaliland will always safeguard its integral rights from any foreign incursions.

He protested to the governments of Kenya and Ethiopia for having some of their resident official politicians and traditional leaders indulge in subversive acts against Somaliland with actions fomenting, fanning and fueling wars on tribal lines.

He equally warned Puntland to desist from its declaration of war against Somaliland and cautioned Somalia to refrain from indulging in the internal matters of the country.

This follows riots in Lasanood following the slaying of a politician last week.

The Head of State made an address to the nation immediately after presiding over a crucial meeting on Tuesday  3rd January 2023 at the Presidency that brought together the heads of top government organs that included the Speaker of the Upper House of Parliament, the GUURTI, Hon. Suleiman Mohamoud Adan and his deputy Hon. Said Jama Ali, the Deputy Speaker of the House of Representatives who is presently Ag Speaker Hon. Said Mire Farah (Girre), members of the cabinet, intellectuals, MPs, various leaders and politicians.

The meeting was focused and resolved on concerted efforts in working to have a unified consensus on ways and means of achieving peaceful stability in Lasanood hence fruitfully calming public concern over the spate of past terrorist-style assassinations in the area.

While highlighting the unfortunate incidences of the said area, the President was convictional that the issue would be addressed at a national level and elaborated on the plans of prioritizing the engagements towards the realization of a tangible harmonious setting.

He commenced his speech by once again sending his condolences to the next of kin, family members and relatives of all those who lost their lives in the skirmishes following the riots.

He called upon all across the board, from eminent personalities, elders, community leaders, and intellectuals to women and youth of Sool region to accord special importance efforts to working towards a peaceful setting, since dialogues, discussing and pondering on the issue is the key to addressing the problem by achieving consensus.

The President said, “Today, what we are embarking on is to work together for a peaceful settlement of the people, and our emphasis is working with the resident eminent personalities, leaders, intellectuals, youth, traditional leaders and women of Lasanood”.

He said that whatever disagreement there is would be delved upon through deliberations but the maintenance of peaceful stability is a pre-requisite since without it nothing can be concretely solved.

He appealed for calmness such that security arms may withdraw from the city since they are there only to keep security.

“When peaceful stability is found and the city opens up, the army will leave, for they are there only as protection and not oppression”.

While recalling past terrorist assassinations executed in the area the President revealed that since 2009 40 persons were murdered and in connection to those cases 32 have been apprehended.

He further explained that of the 32, 23 have already been sentenced while 7 are ongoing hence 2 have been already been acquitted.

The remaining 8, the President disclosed, were still at large and being sought by the security arms.

Of note is the fact that the President pointed out that 24 of the victims who were targeted happened to be senior government and national officials with most of the murdered being from the judiciary, prosecution and security services, with two of them being regional chairpersons for both the official Waddani and Kulmiye parties.

The remaining 16, he said, were patriotic personalities who were ardent supporters of the government.

The President expressed his dismay that foreign politicians and administrators would indulge in subversive acts to undermine the nation of the republic of Somaliland.

H.E. Musa Bihi Abdi pointed finger at politicians from neighboring countries who are fomenting war and subversion in Somaliland.

He took a swipe at Kenyan politician Farah Maalim, a former deputy speaker and now an MP who had always been at the forefront of defending Somaliland’s justified nationhood and aspirations, for calling up for arms against the country.

He noted that it was ironic that he (Farah Maalim) came to Lasanood and took his children and others numbering 10 and enrolled them at Amoud University where they studied, and now unexpectedly and shockingly, rants subversively against Somaliland coaxing people to take up arms and fight along tribal lines.

He said similar fomentations of war cries were also heard from resident personalities of Somali State.

The President particularly hailed Sultan Abdirahman Rafle of Somali State of Ethiopia who appealed for peaceful calmness and dialogue to address the matter.

The President sternly cautioned the leaders of Somalia’s Puntaland administration to desist from their war cries following their declaration of war upon Somaliland or face severe repulsion.

He said that their declaration of war was totally uncalled for and also unexpected.

He reiterated the fact that Somaliland always stood for peaceful stability, harmonious setting and good neighbourliness.

He said that the nation of Somaliland is always ready to defend itself from any attacks from any quarters, given that when it comes to nationhood, the country and the people are all united across the board, political affiliations not with-standing.

The President underscored the fact that Somaliland is sufficiently equipped to handle its own affairs and will never allow anyone else to intervene acrimoniously. He warned the traditional leaders from the said quarters that are out to fan and foment chaos to desist forthwith, and instead, help in realizing peace if they care at all.

He asked the leaders of the governments of Kenya and Ethiopia to respond to the accusations of the individuals who are officials or residents in those countries and are engaged in acts of subversion hence undermining Somaliland’s nationhood.

At the same time the President warned and cautioned the parliament and leaders of Somali government to likewise refrain from their interference of the Sool issue which is an internal matter of Somaliland.