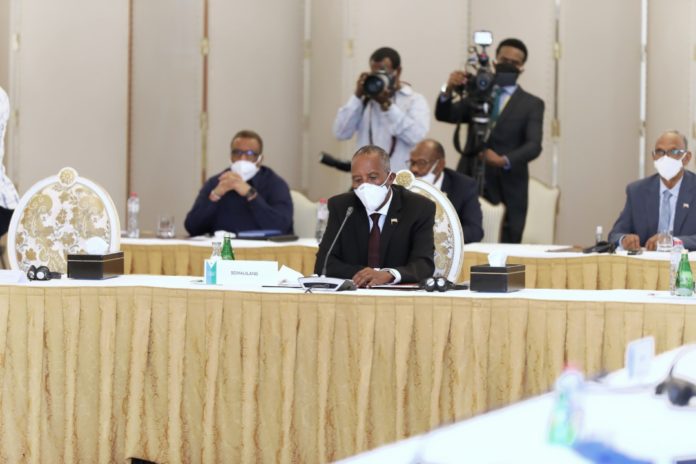 Remarks By H.E. Musa Bihi Abdi The President of the Republic of Somaliland

At the Consultation Summit on Relations between Somaliland and Somalia

Mr. President and Chairman as well,

First and foremost, let me say that it is a great pleasure to be here with you today to participate in the continuation of the dialogue between Somaliland and Somalia. Allow me to extend my sincere appreciation to the regional, continental and international community for your
presence here today, to discuss a topic of great importance to the Horn of Africa. Allow me to further thank H.E. Ismail Omar Guelleh and the people of Djibouti for their warm and brotherly hospitality in welcoming us to this beautiful country. Though we may be separated by land and sea, nothing will diminish the important roles you all
play and will continue to play, in your efforts to bring peace and stability to the African
continent.
The region is suffering from a combination of unprecedented challenges, which range from
COVID-19 to environmental and socio-economic issues. Regional cooperation and hegemony is urgently required to steward the vulnerable to a more prosperous and stabile future.
Restarting of these mediation talks with international support is an important factor in securing a more sustainable future in the fulfilment of the onerous and worthy duty of building a safe, secure and stable relationship for the people for Somaliland and Somalia.
Excellencies, allow me to stress the current phase that we are entering is crucial in shaping the future bilateral relationships between our two neighboring countries, regional stability and a sustainable and prosperous future for the Horn of Africa. However, daunting or important such
a task is, I remain confident and optimistic that through our – and your attention, commitment, hard work and dedication we will be able to contribute to the peace and security landscape across the African continent.
Excellencies, Allow me to present a brief historical background on how we got to where we are today. Republic of Somaliland received its independence from the United Kingdom on 26 June 1960. Notification of that independence was duly registered with the United Nations and 35 countries recognized Somaliland. Somaliland voluntarily united with Somalia on 1 July, 1960 to form the Somali Republic. The union was not legally binding, as the Act of Union was never formally signed. Therefore, the unification effort fell short of the requirements mandated by domestic and international law.
From the beginning, the union malfunctioned as Somaliland people were hugely oppressed. The people of Somaliland expressed their displeasure with the union by overwhelming voting against the new constitution in the referendum held in 1961 and a followed full-scale struggle against the Somali Republic. This resulted in the collapse of the Somali Republic in 1991 and the restoration of the independence of the Republic of Somaliland on 18 May 1991.

Since restoring its independence, Somaliland with its scarce resources, and with limited
international support, has embarked on a steady, incremental and progressive agenda of
conflict resolution and peace building, state building, established good governance and
functioning government institutions, conducted a constitutional referendum in which 97% of Somalilanders voted to approve the constitution and the independence of Somaliland. During that period Somaliland held multiply rounds of multiparty free and fair elections including three rounds of presidential elections, two rounds of local council elections and parliamentary elections. Republic of Somaliland also created a conducive environment that enabled a thriving private sector and an in-flow of international investment. Somaliland has played an important role in the peace and security of the region and has been a reliable partner in the fight against terrorism, piracy, human trafficking, money laundering and other forms of organized crimes.
Unfortunately, instead of appreciating all those efforts and contributions made by the
Somaliland people for the last 30 years, Somalia was in a constant war against the development of Somaliland, economically, security wise, investment wise and this deepened the mistrust and animosity between the two countries.
Ever since Somaliland entered hastily into a voluntary union with Somalia, the people of
Somaliland has been at the receiving end of injustice, discrimination and state sponsored
genocide at the hands of the Somalia government.
Evidence of widespread war crimes committed against the people of Somaliland has been fully documented by the UN special Rapporteur for human rights and a forensic team from
physicians for human rights and Somaliland War Crimes Commission.
The acts of genocide perpetrated by the Siyad Barre regime are memorialized in more than 200 mass graves. These mass graves which are still being unearthed will forever testify to the crimes against humanity committed by the government of Somalia against the people of Somaliland.
Therefore, in approaching the present situation in Somaliland and Somalia, it is necessary to have proper regard to the past and learn lessons from it. The legacy of oppression against the people of Somaliland cannot be easily swept away. Rather they must be acknowledged and taken into account when considering Somaliland people’s right to self-determination and independence.
The case for Somaliland independence is unique. This fact is also acknowledged by the AU mission to Somaliland in 2005 that concluded the situation was sufficiently “unique and self- justified in African political history” that “the case should not be linked to the notion of pandora’s box. It recommended that the AU “should find a special method of dealing with this outstanding case” at the earliest possible date.
Furthermore, the 2005 AU fact mission to Somaliland reported that the “plethora of problems confronting Somaliland (are in part) the legacy of a political union with Somalia that malfunctioned (and) brought destruction and ruin thereby overburdening the population”. Somaliland’s claim to independence depends on part upon its circumstance including its brief, but legal, period of independence in 1960, its claim to recognized international borders relating
to that period. As can be surmised from above Somaliland’s case is unique and demands unique solution. It does not create precedent for other unresolved conflicts in Africa or elsewhere.
Somaliland’s legal case for independence is in conformity with international laws. Somaliland satisfies the statehood criteria as set out in the Montevideo convention of 1933. Somaliland fulfils the conditions set out in article 4(b) of the Constitutive Act of the African Union which enshrines respect of borders existing on achievement of independence since Somaliland borders correspond to those received upon independence from Great Britain.

Somaliland is fully aware that in the African context, the exercise of the right to self-
determination is linked to the principle of respect for pre-existing boundaries (utipossidetis juris). Somaliland’s case for independence involves restoring borders it possessed both as a
colonial entity and as an independent state. Between 1991 and 2000, the OAU consented to the break-up of two other unions. In 1989, Senegal opted to terminate its seven-year merger with Gambia as Senigambia federation and 1993 Eritrea formerly seceded from Ethiopia. Furthermore, in supporting the comprehensive
peace agreement signed in 2005 and subsequently independence of South Sudan and its
admission to the AU, the African Union has accepted the break-up of Sudan.
The International Court of Justice in its legal opinion on Kosovo declared in 10 to 4 vote that the declaration of independence of Kosovo of the 17th of February 2008 did not violate general international law because the international law provides no prohibition on declaration of independence.
Furthermore, the Arbitration Commission of the Peace Conference for Yugoslavia (Badinter
Commission) produced a series of opinions on the validity of new states’ claim to independence and the conditions for recognition. The Commission determined, inter alia, the break-up of Yugoslavia was case of dissolution rather than secession.
Somaliland’s pursuit of independence is not a case of secession but rather dissolution of
voluntary union between two independent states. A number of AU member states are also the product of a failed union: Mali, Senegal, Gambia and Egypt have all withdrawn from unions with their borders intact. The AU has also accepted the independence of territories that never previously enjoyed full sovereignty.
Following the failure of the unity government, Republic of Somaliland exercised its inherent
right to self-determination which are consistent with the preamble of UN 1948 Universal
Declaration of Human Rights. Somaliland has long argued that Somali Republic was two united countries. The Failure of the unity government provided adequate ground for the restoration of the independence of Somaliland Republic.

We believes in that the key to sustainable and peaceful future lies in an honest and sincere
dialogue between Somaliland and Somalia under the auspice of a neutral and impartial
international mediation mechanism and a guarantor.
Somaliland remains committed to a peaceful co-existence with Somalia. However, Somaliland insists in that the dialogue should be a two state process with a substantive agenda that address the core issues of the dispute. Today, how can we proceed to this dialogue, if the previously signed agreements in London, Istanbul and Djibouti were not implemented yet? We cordially propose that a serious mediation mechanism and a guarantor should be in place for this new round dialogue.
We thank Somalia for their sincere apology today for the horrors of yesteryear committed in Somaliland. The current generation of Somalia was of course not responsible for what the previous generation did but its acknowledgement of the wrongdoings of the previous
generation is significant and heartfeltly appreciated by all Somalilanders. But with
acknowledgment also comes responsibility – responsibility for the damage that horror caused.
Words are not enough – the horror of the past requires more than words, it requires actions.
The act of recognizing and supporting the independence of Somaliland would go a long way to heal the wounds of the past and enable our two states to embrace each other in our
independent but closely interwoven futures.
I am confident that we can build a brighter future together as brotherly, neighboring nations and for our own people and the region. 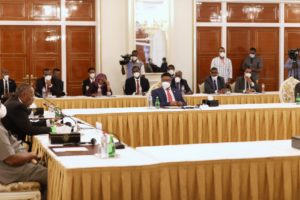 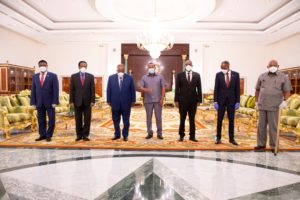 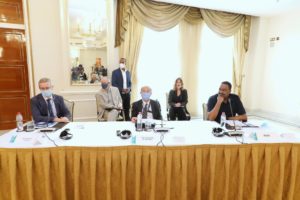 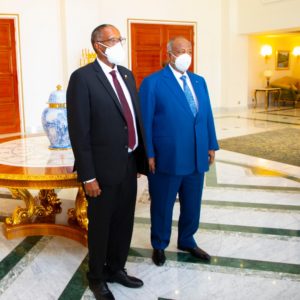 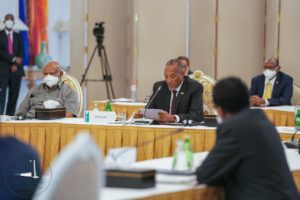 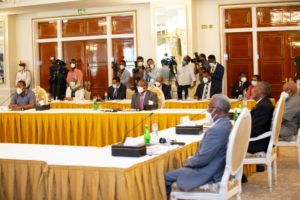 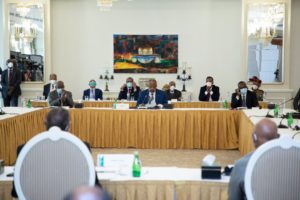 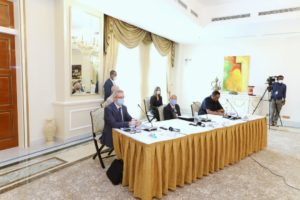 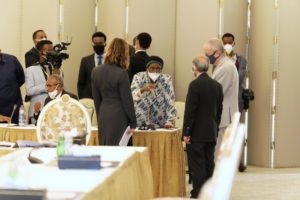 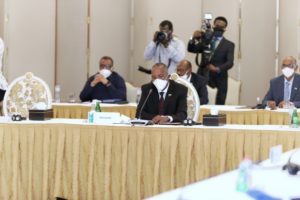 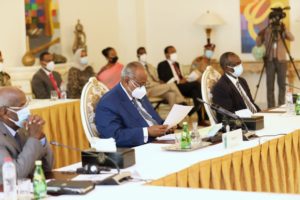 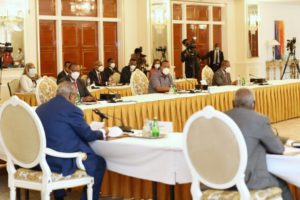 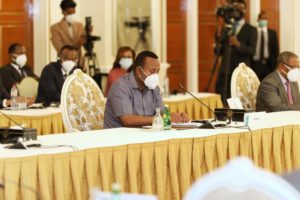 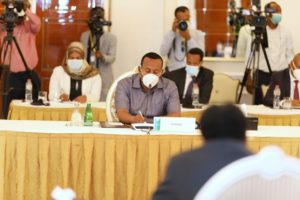 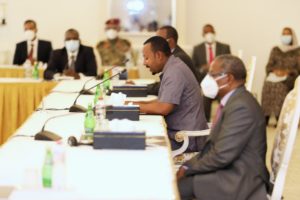 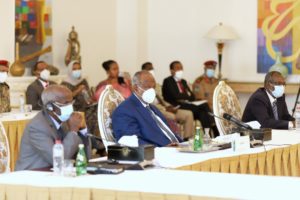